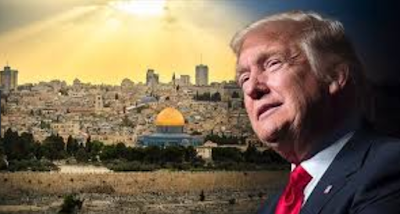 Haaretz, Israel's equivalent to the Guardian, featured a column on Thursday by Allison Kaplan Sommer wherein Ms. Sommer considered the possibility (in her view) that Donald Trump is succumbing to Jerusalem Syndrome ("that disorder in which a recent visitor to the Holy City begins to take on the personality of a biblical figure") and starting to see himself as The Messiah. ("It just could be a logical next step on Trump's path of auto-hagiography.")

That was evidently more than enough for the team at Radio 4's Sunday. On the same day that the article was published, they tweeted Allison:

The result? She was present-and-correct on Sunday this morning talking about the reasons behind the US President's decision to recognise Jerusalem as the capital of Israel - mainly "to placate evangelical fundamentalists" in US elections - and the theology behind it.

Explaining the theology behind it was the reason Sunday gave for why she was on. She, however, rather gave the game away by declaring herself to be no expert on the theology - "far from it!". She said she was just passing on what she'd learned (and it sounded like it too). She added, "It sounds absurd to many of us".