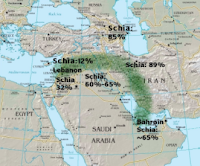 Catching up with things, I really did enjoy this week's Start the Week. Andrew Marr & Co. talked all things Russian, and the range of views wasn't as predictable as you might have expected...

...except perhaps for Andrew's own views!

Passing by this remarkable statement...

Can we start, Dominic, by talking a little bit about another aspect of Russia, which is its powerful Muslim identity? We don't often think of Russia as a Muslim country but, of course, Moscow is one of the great Muslim cities of Europe.

(Dominic himself talked, more realistically, of Muslims as having a peripheral place in Russia.)

....shall we savour instead this opinion from Mr. Marr?

Roy, a lot of people think that we are heading towards a major Sunni-Shia conflict across the whole part of that world. Certainly that's what Netanyahu thinks. The rhetoric from the Saudis is beginning to look that way as well. Increasing sort-of hysteria about Iran reaching the Mediterranean.

Is it really "hysteria" for a country like, say, Israel to fear Iran's growing power in Syria and Lebanon (an Iran committed to its destruction)?
Posted by Craig at 14:25