This is a local blog for local people... 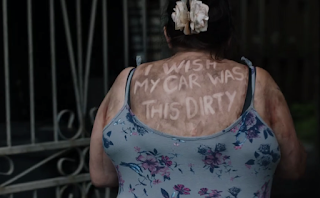 In this house we always liked The League of Gentlemen, and it was very kind of the BBC to bring it back after 15 years for three final episodes on consecutive nights just before Christmas.

It was horrifyingly funny.

I loved almost every second of it.

(I got very squeamish about one thing  - no, not the exploding hedgehog scene - but I'll only share that with a psychiatrist and/or Sue).

Barbara: So, is it good to be back, Benjamin, after all this time?
Benjamin: It is, though under sad circumstances, obviously.
Val: Do you two know each other?
Benjamin: Yes - Barbara was the first person I met in Royston Vasey. She was very friendly, as I remember it.
Barbara: Hey, hey, hey, hey! We'll have none of that in here! No hate speech.
Benjamin: Hate speech? I...
Barbara: Gender neutral pronouns only. People used to make fun of the likes of us. Well, that's all gone now - the world's moved on. We are no longer a source of cheap humour and laughs. No. And this cab is a safe, friendly, mutually respectful, and above all, tolerant space!
Benjamin: What pronoun do you use?
Barbara: Well, if you don't know, you can piss off out of it - I'm not fucking telling you!

Barbara: Oh, no, I don't like to use LGBT - it's too limiting. The acronym I prefer is ACRONYM. Actively Considering Reassignment Or Not Yet Made Your Mind Up.

Now, the original The League of Gentlemen had something even more 'controversial' (in today's Twitter Age terms) than a gruff-voiced, hairy-armed transsexual taxi driver, and I surely can't have been the only fan to wonder if the BBC would dare, in 2017, to bring back the very wicked Papa Lazarou.

Indeed (not very good spoiler alert!), it's very obvious that the makers of The League of Gentlemen knew we'd be thinking that too, hence the blackface-sporting circus ringmaster being kept till almost the closing minute of the final-ever episode. 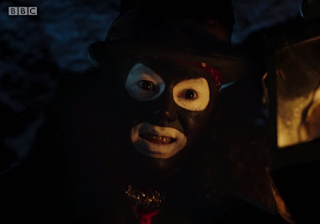 But, yes, they did indeed dare. Papa Lazarou was back, and still sporting blackface.
Yes folks...

Where's the Twitter storm? Why aren't the writer, actors and BBC commissioners fleeing for their lives from the (Twitter) mob? Why hasn't Lord Tony Hall been put through a mincing machine?

(Ed - Princess Michael of Kent, a regular reader, has just emailed us to say, 'Yes'.)

Anyhow, where the BBC bias in all of this? Well, it was there. Oh yes.

The programme's other most notorious (and popular) characters, the inbred, psychopathic Edward and Tubbs, were back and slicing people's faces off. Lots of local, stupid, ordinary people in Royston Vasey rallied to their inadvertent cause - a cause with slogans based on the couple's famous catchphrase 'This is a local shop for local people'. And the local, stupid, ordinary people won.

Yes, The League of Gentlemen was satirising Brexit and Brexiteers. (Even Matthew Parris appeared, playing a pro-Edward and Tubbs commentator.)

Do I really care? No - especially as this angle played such a small part in the programme. Blink and you might have missed it (if you're a complete idiot).

That said, the chances that a revival of The League of Gentlemen or of anything on the BBC would ever result in anti-Remain satire remain very, very, very low - vanishingly low even. 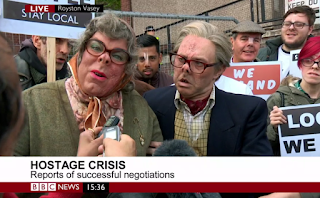 And, thus, I've managed to turn a 'fan post' about the brief revival of The League of Gentlemen into a piece about BBC bias.

I think even Pauline might have been impressed enough by that to have given me one of her pens. (Alas, poor Pauline!)
Posted by Craig at 22:04

Labels: 'The League of Gentlemen'