Diane Abbott, that Mojito, the Daily Mail and the BBC 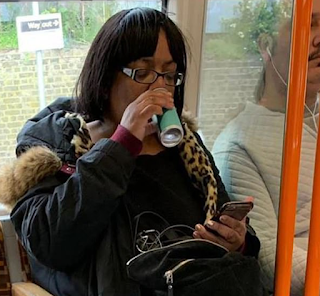 Having a cheeky Cuban-cocktail-in-a-can on a London Overground train on a hot afternoon isn't much of crime, even if it actually is a crime and the person committing it is the country's Shadow Home Secretary.

In my book, it's on a par with doing 72 mph on the motorway (something, of course, I don't actually do).

Some nice person, however, took a photo of Diane Abbott lost in thought whilst looking at her mobile phone and sipping on an M&S Mojito, and The Sun then splashed with it.

Some said, she's breaking the law by flouting Transport For London's alcohol ban, and, OMG, she's drinking at 1 pm in the afternoon, and we expect better from our politicians.

Others said, well, it's no big deal and a perfectly understandable thing to do on a hot afternoon.

Of course, the usual partisans went up-in-arms, smiting their enemies on Twitter (etc). Ms Abbott's most intense critics are being intense about it and her Corbynista defenders are raging with all the fury of the psalmist in the Old Testament at her critics.

Tellingly, the media has also divided over its reporting of this.

Compare, say, the Daily Mail with the BBC News website. One inclines against Ms. Abbott, the other inclines in favour of Ms. Abbott. Guess which does which!

That said, the Daily Mail, actually achieves balance in terms of the number of reactions it quotes, with four people criticising her and four people defending her. The BBC, in contrast, quotes just two people - both defending her.

The Daily Mail article goes on to detail her previous 'gaffes', while the BBC article doesn't.

Instead the BBC goes on to not-so-subtly suggest that Boris Johnson's alcohol ban wasn't a great idea:


The alcohol ban was introduced by the then Mayor of London, Boris Johnson, in an attempt to tackle unruly behaviour on the TfL network.

It was described by union leaders as "half-baked".

On 31 May 2008 - a day before the alcohol ban came into place - revellers enjoyed a "cocktail party" on parts of the London Underground, mainly on the Circle Line.

Within the first five months of the ban being enforced, a BBC investigation found that British Transport Police spoke to 35 people who had been seen drinking alcohol on the Tube.

However, none of those incidents was recorded as a criminal offence.