Hand signals in the air

One of the dafter claims of bias from the Left this week arose after the BBC's hyper-demonstrative deputy political editor Norman Smith appeared on Wednesday's BBC News at One and reported the fury of several Conservative MPs at Mrs May's announcement that she'd be meeting Jeremy Corbyn to try and work out a cross-party deal over Brexit.

We've had a whole series of Tory MPs getting up amazed that Mrs May is prepared to do a deal with a Marxist rather than with her own party.

A few Corbynistas saw this and rushed to their phones and iPads, and the Red Guards of Twitter were soon marching out against Norman Smith, accusing the BBC of "blatant bias," and of "parroting" the Right's attacks on the Labour leader, and of giving the term 'Marxist' "currency" in connection with the sainted Jeremy.

Of course, Norman had simply been reporting what had happened and quoting the term used by Conservative MPs in the House of Commons.

He even used the hand gestures some people use to show that they're quoting people - the 'in inverted commas' gesture. (I always think of it 'drawing rabbits ears in the air'). 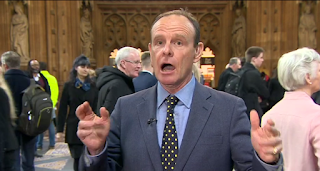 And it's a gesture that doesn't only signal that the user is quoting somebody else, but usually signals that the user is distancing himself from the word (or words) being used, and frequently suggests they're being ironic (sarcastic) about them...

...and given the wide-eyed, body-swerve kind of 'double-take' Norman did whilst doing the 'drawing rabbits ears in the air' gesture around the word 'Marxist' I think you'd have to be a totally ideological, confirmation-bias-driven fool (no offence) to think that the BBC man was himself calling Jeremy Corbyn a Marxist rather than quoting - and distancing himself from - those Conservative MPs in the House of Commons.

But plenty of pro-Corbyn Twitter people evidently thought just that. I've chosen the first one I came across just now by doing a Twitter search where the Corbynista lady says: "The BBC's Norman Smith stating Corbyn is a Marxist without so much a cough or a wink. [She obviously completely missed the dramatic air quotes]. BBC News is using the sublime to normalise lies as they have with  UK Labour being anti-semitic ..dangerous times with our state broadcaster".

Of course, we might now, in turn, say that Norman Smith actually showed pro-Corbyn bias by so flagrantly placing the word 'Marxist' in the irony marks of inverted commas and by distancing him self from those Tory MPs too much and too ostentatiously. After all, isn't Mr Corbyn as close to being as Marxist as you can get without being John McDonnell?