How do you feel about T**** Robinson? (Real name Stephen Yaxley Lennon).

I think I was one of the first bloggers to give him the (cautious) benefit of the doubt, back in the olden “Biased-BBC” days. From a post in July 2011.

“Stephen Lennon AKA T**** Robinson – he has two names, so people usually call him the bloke from the EDL – had another grilling on BBC News 24 from £92,000 per annum worth of BBC anchorwoman, Carrie Gracie. However hard she tried, she just couldn’t trip him up, and she didn’t bother to conceal her frustration.

Breivik’s insane killing spree has unleashed some unedifying spectacles of no-holds-barred lashing out at the ‘far right’ from the media and the BBC, and their favourite target is the EDL, which they see as the epitome of illiberalism and intolerance. The more Ms. Gracie insisted that the EDL had ‘the same objectives’ as Breivik and tried to connect him and his atrocity with the EDL as an organisation, the weaker her case became. She failed to ridicule him, trip him up, counter-argue or bully him on any level at all, but instead got herself more and more worked up, so that the whole of the following item was conducted with a rictus grin.

By merely admiring the way Stephen Lennon stood up to the BBC I foresee the prospect of being inextricably associated with the EDL for ever more. But I support Israel, which already places me as a right-wing nutter, so what the hell.”

See how scared I was at the prospect of discrediting myself by offering a somewhat guarded defence of T**** Robinson? 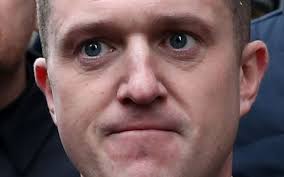 I still feel a similar sort of trepidation, because no-one wants to be dismissed as a far-right extremist. (Actually, am I bovvered? I mean one only has to look a bit like a Zionist to be classified as a far-right extremist.  As Stephen Pinker said - if we view the left as a pole - a spot from which all directions, by default, are right  - then weirdly, any position not overtly anti-Israel is deemed ‘right-wing’ by the left. See? Left = good; right = bad.)

I rarely listen to the BBC any more. The Today programme, Question Time and a couple of dramas, maybe, is all.

Someone had tuned my radio to LBC, and I heard Matt Frei interviewing Gerrard Batten this morning. He was in sync with the Beeb’s Martine Croxall. What a revealing transcript Craig brought to us!

Matt and Martine’s shared attitude to T**** Robinson demonstrates the increasing vacuousness of the media these days. They seem to know next to nothing about western society’s inharmonious relationship with Islam, and even less about the public’s growing awareness of it. Matt’s dismissive view of Islamic extremism - “it’s only a very tiny minority” - echoes a particularly feeble defence of Brunei’s brutal new Sharia law I keep hearing. “Rarely implemented; a deterrent, is all.”

Coupled with Mishal Husain’s indignant reaction to the very idea that anyone should be opposed to Islam, the ‘London-centric media bubble’ or whatever you’d like to call it is looking ever more isolated from reality.

For that matter, the same attitude is found amongst most politicians. They all think it’s enough to treat T**** Robinson as if he’s so beyond the pale that they can dismiss him as a far-right racist thug and be done with it. Just like that. That’s how they rationalise the US tech giants’ collective decision to deny him a platform. That is almost unbelievable in an age where all but the most radical and extreme Islamic propaganda enjoys a prolific and unhindered media presence.

What do I think of T**** Robinson? Firstly, I have to admit that the hostility he endures from all and sundry almost drives me towards overlooking his shortcomings.

What are they? (You ask.)
Firstly, his ill-advised cul-de-sac type deviations that distract from the main issue. When he’s calm and reasoned he can be knowledgable and articulate. He has come a long way, but there are still plenty of rough edges, but he is apt to sabotage his own legitimate arguments by unnecessarily introducing irrelevant ones.

The case against Cambridgeshire police was one such. He will borrow some of the more lamentable tactics from the people he opposes to beef up his case. For example, exaggerating the psychological damage to his ‘babies’ at the hands of the police, whose clumsy handling of the eviction from that pub seemed quite unfair; although this is a rather weak point of mine, I’d say he well knows that losing his anonymity is part and parcel of his activism. It’s not quite as bad as Sadiq Khan’s inappropriate reflection concerning city dwellers and terrorism, but Tommy has effectively given up his personal freedom by dint of his notoriety. That’s life I’m afraid. No use complaining about the fact that activism and celebrityhood entail sacrificing an element of personal privacy. The judge was right in to throw out this case; it was an utter waste of dosh.

Another TR video (there are still thousands out there despite the best efforts of the no-platforming project) shows Tommy outside the BBC, criticising the Cecil Rhodes Eric Gill statue on the grounds that Gill was a paedophile, ranting that the BBC “refuses” to dismantle the statue, and foolishly confusing the words ‘incestuous’ and ‘insidious’ in the true Mrs Malaprop  tradition.

I also think there are as many weak arguments in the PanoDrama film as there are strong ones, and I suspect Tommy himself probably recognises them. (I hope so.)

T**** Robinson lacks sound tactical guidance, and he could really do with someone on his team who can spell (for the subtitles.)  If you’re going to make significant headway, you need to pay attention to these things.

I’d be interested in any comments you Tommy fans out there might care to make.
Posted by sue at 21:00