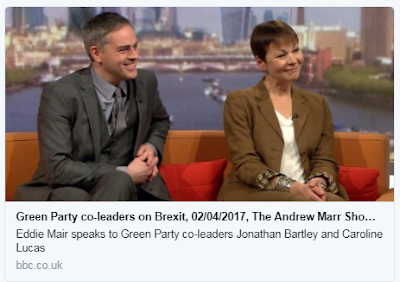 This one didn't quite come off for Rob:

Why to vote Green #FBPE: Sad but not surprising that #Marr has no-one from The Green Party on the weekend of the Green Party conferance? Andy, don't you think the brilliant Sian Berry, Jonathan Bartley or Caroline Lucas would have brought a bit more zing than a protracted interview with the dismally dull Brandon Lewis?
Jonathan Bartley: Pretty sure I’ve never been interviewed by Andrew Marr. Does that make me the only party leader in the country that hasn’t?
Rob Burley: It was obviously a memorable experience for you Jonathan. You have been on Marr. As leader. And you were interviewed!
Andrew Marr: It wasn’t Andrew Marr who interviewed - or have I got that wrong?
Rob Burley: Oh was it Eddie Mair? Does that ring a bell?
Minnie Rolfe: So for clarity, Jonathan Bartley has been interviewed on #Marr once but never interviewed by #Marr himself. It's a long time since Eddie Marr covered for #Marr, isn't an interview with Jonathan Bartley over due?