Not quite in the Premier League

The main theme on this week's Newswatch though was the BBC's royal coverage (in the week of Princess Eugenie's wedding, Harry and Meghan's baby news and Pippa Middleton giving birth).

There have been complaints from both sides  - complaints that the BBC has been too sycophantic and complaints the the BBC was too rude about the Royals - thus allowing Samira to say:

Clearly, this is one of those topics where it is impossible for the BBC to please all of the people all of the time.

She then talked to the Deputy News Editor of BBC News, Toby Castle, and I had to smile at Toby's reply to her first question.

Samira Ahmed: Let's start with the last issue. It's a charge often laid against the BBC that when it comes to the Royal Family you seem to throw editorial values out of the window and proportion.
Toby Castle: I would reject that. But I expect that you would expect me to say that.

Well, you're not wrong there, Toby!

Monkey Brains on the Open Thread compared Jonny Dymond's commenting on the Royal Wedding to the annoying experience of "hearing a bored woman on the BBC pretending to be interested in sport because that's what pays the bills". Jonny's official title (BBC Royal Correspondent) comes despite "this guy clearly having no interest in the idea of monarchy, in the royal family or in the clothes they wear for special occasions. That's not my interpretation - he made it abundantly clear himself with various sarky comments." 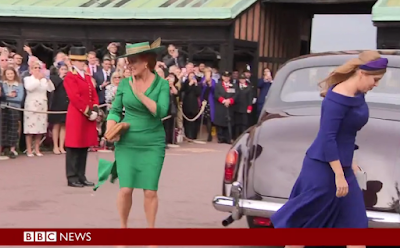 Well, Newswatch featured a clip of Prince Charles's least favourite BBC royal reporter Nicholas Witchell commenting on Princess Eugenie's wedding. And there were sarky comments galore from him too:


Hold onto your hats, it's another royal wedding. Though this one, not quite in the Premier League, despite the sharp ambitions of the bride's father and mother. The Duchess of Cornwall evidently had a pressing engagement and couldn't make it. And then stand by for the arrival of the mother of the bride, Sarah Ferguson, also known as the Duchess of York. She's not been an entirely welcome figure within royal circles for a good many years. She's had an unfortunate habit of embarrassing them. And then as man and wife together, a carriage ride, it's been seen as an attempt to emulate the ride is taken by Harry and Meghan after their wedding and concerns have been expressed about the cost of providing security.

I don't think that could be called 'sycophantic', do you?
Posted by Craig at 12:19