This week's Newswatch began with Samira Ahmed noting that the so-called People's Vote march last Saturday had led BBC News that day. Some had complained that the extent of the coverage was not warranted, she said, but "many more complaints" came from those who thought the demonstration should have been given greater prominence and who objected to the inclusion of Nigel Farage in a Chris Mason report. A senior BBC editor was duly invited into the studio....

I'm still not really buying the 700,000 figure he obligingly parroted for that march or his assertion that the issue motivating the WASPI women's pension protests "affects many, many millions" because the latter simply isn't borne out by the facts. You might therefore ask: Has the BBC Controller fact-checked this? 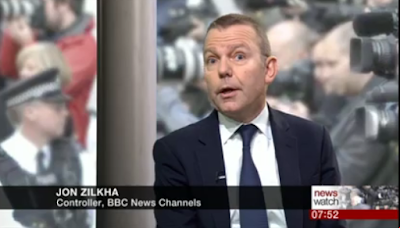 Samira Ahmed: Well, to discuss how BBC News assesses the news value of protest and demonstrations, I'm joined by Jon Zilkha, controller of BBC News Channel. Thank you for coming on. Let's start with the People's Vote last weekend. The vote march. What made that one deserving of coverage?
Jon Zilkha: I think in the first instance, its sheer scale. 700,000 people, probably the largest march since the protest against the Iraq war 15 years ago, is something that is clearly noteworthy. The second is this is clearly the greatest issue facing the country at the moment, the future of the Brexit negotiations and what kind of future relationship we're going to have with the European Union. On both of those criteria, this was clearly going to be a major news story and one that would have a considerable amount of coverage that day.
Samira Ahmed: So numbers - the turnout - is significant in the BBC's assessment?
Jon Zilkha: Numbers clearly is going to be one of the key factors, but not necessarily the only one. It is fair to say that not all demonstrations by any means are going to be covered as a network news story or a national news story. But on this occasion, the national significance, the fact that this is considerably still one of the most debated matters in national discourse means that inevitably it was going to be higher on news running orders that day.
Samira Ahmed: Some viewers are wondering why did Nigel Farage's very small event in comparison in Harrogate, get coverage?
Jon Zilkha: The Farage event was included as a way of giving extra context to what was not just the scale of the march but the argument the march was seeking to raise. Clearly those people who were marching that they were campaigning for a second vote or a further referendum on the final Brexit deal. There are many people who disagree that such a vote is necessary. And low down Chris Mason's report in a clip of six seconds duration we gave voice to that by simply saying through Nigel Farage's words that there are those that think such a further referendum is not needed. That does not mean to say that the two events were given editorial equivalence by any means. Clearly, the vote in London (sic) was far larger but there was no equivalence given to those two things.
Samira Ahmed: Interesting you use the word 'equivalence' because to those viewers who complained, they thought it looked like the BBC was trying to balance something that did not need balancing and that there was a false equivalence putting Farage in there at all.
Jon Zilkha: It is not about false equivalence, it's about saying 'Is there another argument?' The other argument is there are many people who don't believe a further referendum is necessary, and a 6-second clip is simply a way of amplifying that, especially given that, as I say, campaigners on that side of the argument continue to make their argument and all it really demonstrates is just how polarising and divisive this issue remains 2.5 years after the referendum.
Samira Ahmed: Newswatch gets a lot of complaints that the BBC too often ignores demonstrations. And the WASPI women's pension protest was a recent example. Viewers say there's a significant news story, they have a public turnout and the BBC is consistently ignoring them.
Jon Zilkha: So there are a number of factors that will come to bear on how we decide or not to cover a particular march. The fact of a march or a demonstration is not necessarily news in its own terms. With regards to the WASPI demonstration, it had to take place alongside other news stories that day. No-one is saying that the issue of the campaign that is being led that affects many, many millions of people is not worthy of coverage. In fact, we have covered it in some depth. On that day, Radio 4's World at One covered it for at least ten minutes. The day before, the Politics Live programme also covered that particular issue, as they had six months earlier on The Daily Politics.  So not covering a demonstration does not mean that you don't think a story is worthy of coverage. Actually, covering a demonstration is not always the most effective way to cover an issue. And that particular issue is one we have covered before, and I'm sure we will cover again.
Samira Ahmed: I must say in the past, as a BBC news correspondent myself, in the 1990s, I regularly got sent out to report on marches, to explain what the issues were and to interview participants, and the WASPI protests are exactly the type of event I think I would have been sent on. It seems that rarely happens these days, and too often, viewers say, you get a few pictures of the march and a line to say it's happened and you don't get analysis. Is that fair?
Jon Zilkha: As I said, I think there are a number of factors about how you would decide whether or not to cover a march or a protest or a demonstration. Scale is one, is it a matter of national significance is another, is it a live issue is another. Could there be an outcome as a result of the demonstration, will it change anything is another. But in the end what is going to be the decisive factor is how does it figure in our running orders on any given day. There may be any number of stories that are competing for attention and we have to weigh the significance of them nationally, internationally as to whether they should be included in the bulletin. The fact that a demonstration is taking place or the fact that it's managed to disrupt the traffic is not necessarily going to be something that will bring it air time.
Samira Ahmed: Jon Zilkha, thank you.
Posted by Craig at 09:04