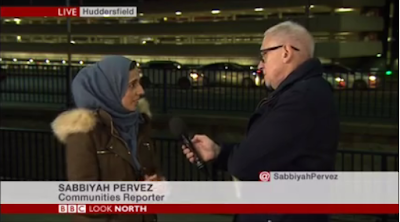 As a grandmother who saved two granddaughters from this evil trade in children, am heartbroken that 'community cohesion' is still the main emphasis in BBC reporting...

Not the safety of our girls.

The programme's coverage didn't hide the fact that the grooming gang phenomenon is overwhelmingly associated with "south Asian"/"Pakistani" individuals and it reported that 13 out of the 15 victims were "white girls", but:


- the exception being the local Labour MP Barry Sheerman, who began by making a point about the BBC's role in the matter:

Barry Sheerman MP: After I gave the media coverage by having a debate in Parliament in January 2009, the BBC, a lot of you media people, it was too hot for you as well. You didn't want to cover it. It was very poorly covered. So no one, let's be honest about this, local authority leadership, police, many of the people that should have been taking this more seriously earlier did not.
Harry Gration, BBC: You've got a community now that you look after that is very seriously bruised and battered. Do you think some people might exploit this to divide the community of Huddersfield?
Barry Sheerman MP: Yes. We're talking about a minority of evil people, evil men, mainly from one community in this case, but remember, the attention will now be on Kirklees, on Huddersfield and Dewsbury and Bradford. The first I heard of these cases was of course in Oxford.Up and down the country, in city after city, Newcastle, Rochdale... This was going on and we didn't wake up to it fast enough or positively enough or early enough.

A reporter for the programme did, however, say that the mother she'd interviewed today was the same mother the programme had interviewed "ten years ago" where she expressed concerns about the council's treatment of her daughter. Wonder what that report was like?
Posted by Craig at 11:17