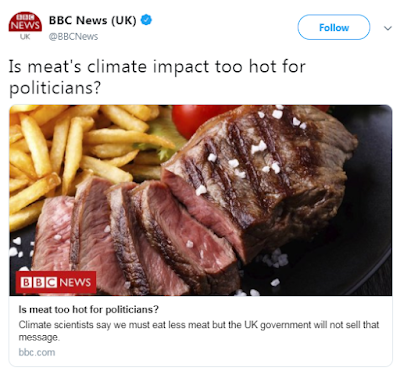 As for the article itself, I really can't put it better than Sir Tohham:

Roger Harrabin has written an article about eating less meat to save the planet.

He doesn’t address whether he will eat less meat himself but instead goes after the climate minister, Claire Perry, with loaded language.

‘She would not even say whether she herself would eat less meat.’

‘Ms Perry refused even to say whether she agreed with scientists' conclusions that meat consumption needed to fall.’

‘She said instead of cutting down on meat, we could use (hugely expensive) equipment that sucks CO2 out of the atmosphere.‘

I’m assuming Harrabin added ‘hugely expensive’ and used ‘even’ to discredit Claire Perry and to accentuate his case.

He is the worst type of BBC journalist, always pushing an agenda, using words to deliberately set a tone and forever lecturing on what we should do.

Even the opening line of the article is loaded: "Just a week after scientists said huge cuts in carbon emissions were needed to protect the climate, a UK minister has shown just how hard that will be."

He means that she's part of the problem.
Posted by Craig at 13:42