By special request, I’m posting this image to illustrate the comment below (Sisyphus10 December 2018 at 10:00)  ‘Out of Office' Open thread. 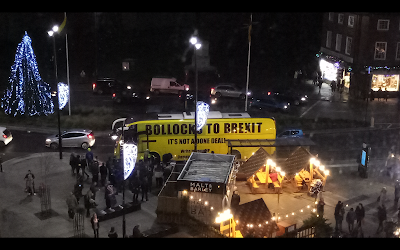 “I was away for the weekend & accidentally deprived myself of wi-fi, so thanks, Peter for the up-date on the social media response to the Alistair Campbell/Jenni Russell squabble on Newsnight.
What I did not miss, though, was what was going on opposite Worcester Cathedral at about 4.15 on Saturday: having eaten a well-lubricated lunch, my wife & I returned to our hotel for a quick snooze. We had barely zizzed our first zeds when a commotion began outside: a quick peek through the curtains revealed a large yellow bus, bearing the legend:"Bollocks to Brexit," and a group of 15-20 people standing alongside it chanting the slogan. If the BBC reported this, it probably said a crowd of 100,000, so I repeat: THERE WERE 15-20 PEOPLE.
Two questions come to mind: who is funding this? and at whom is it targeted? I just had a look on-line & the organisers claim to be 'crowd-funded.' So, which crowd? Is there an EU slush-fund or is it Soros or Bilderberg types? The BBC is very keen on investigating the funding of referendum campaigners so no doubt we can expect a special edition of Panorama soon!
The target age-group appeared to be about 15 or 16 - have they been tipped off that there is to be a second referendum & a lower age-limit of 16?”