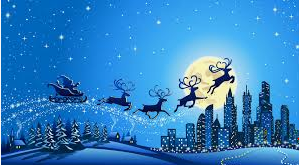 T'was the Sunday before Christmas when all through the blog not a creature was stirring, not even a frog. But I'm up and about nonetheless and reading the Sunday papers online, primed to pull out all the best BBC-related bits and stuff them into your Christmas stocking, ready for when you wake up...

First, Julie Birchill, writing in The Sunday Telegraph, isn't full of Christmas cheer about the BBC, writing "This was the year that the right-on echo-chamber completed its grisly castration of Radio 4 comedy – now all virtue-signalling mutual gratification with fewer laughs than the Christmas Day episode of EastEnders". She adds:

The standard of Radio 4 drama is positively subterranean, more often than not tracing the journey of an autistic asylum seeker contemplating a mastectomy while coping with being a single parent to a dyslexic non-binary child in danger of being taken into care and being bullied online. A recent Archers storyline had resident Lovely Gay Couple hiring a Bulgarian fruit-picker to incubate a baby for them only to have Brexit (hiss, boo, behind you!) wreck their rainbow-hued happiness. There is a strong feminist case against surrogacy and an equally rigorous socialist argument against keeping down working-class wages by hiring cheap foreign labour – but Auntie knows best, and debate is hate speech, and he is she, and self-defence is aggression. Oh, to have Orwell alive and back working at a BBC that appears to have taken 1984 as a How to Doublespeak manual!

Meanwhile, Decca Aitkenhead's interview with Dominic West in The Sunday Times finds the actor casting doubt on the BBC's claims about the "unconventionally diverse" casting for its flagship BBC adaptation of Les Misérables:

The good news is that the BBC has dispensed with the songs and opted for a straightforward drama, written by the wonderful Andrew Davies. The dialogue sounds contemporary, and the casting is unconventionally diverse, with Valjean’s nemesis played by David Oyelowo. “In Paris in those days there was a large number of people from foreign climes, so the BBC is claiming the casting is historically accurate,” West says. “To be honest, I’m not sure. My guess is it’s not strictly historically accurate, but it gives a flavour of what we understand now, in that everyone talks in a modern British way and it resonates with what an immigrant class looks like.”

Incidentally, the "wonderful Andrew Davies", as per The Mail on Sunday, talks of another aspect of BBC social engineering, saying that BBC bosses veto any "droopy, soppy" girls he wants to pen, and that he's not allowed to make his women anything but feisty:

I started writing lead characters for women who disconcerted men quite early on in my career. Now it's compulsory because drama networks are run by strong women who like to see themselves reflected. I often find myself pleading, 'Can't I write a really droopy, soppy girl?' And they say, 'No, she's got to be strong and independent.'

And the same paper features further criticism of the BBC's new Poirot adaptation under the headline 'BBC’s new Poirot story ‘is turned into anti-Brexit propaganda’ by writers who have built on racial tensions that ‘barely feature’ in the novel. The article features a quote from Agatha Christie biographer Laura Thompson:

‘The ABC Murders is a stunning book and is incredibly atmospheric. Why does anyone feel the need to do more to it? Some of the changes sound awful. It’s like everyone who is a Brexiteer has to be shown the error of their ways.’

Back to The Sunday Times though, where the doyenne of radio reviewers, Gillian Reynolds, thinking of a Christmas present for Evan Davis, hits the snail on the shell when describing Evan as sounding "possibly too relaxed" on PM these days. No "possibly" about it, I'd say. It's as if he's already in his dressing gown and wearing his favourite slippers:

You will recall that, after Mair quit PM, there was a decent interval while BBC contracts sorted out what it could afford to pay his replacement, Newsnight decided whether it wanted to keep him, and he carefully considered the bliss of never again having to express admiration for the dress sense of Emily Maitlis. Now he has had a couple of months in the new Radio 4 job, Davis sounds relaxed. Possibly too relaxed. So he’s going to get a giant pack of impatience tablets, as used by John Pienaar and Emma Barnett, guaranteed to get an answer even out of Theresa May.