Only on the BBC

Satirising the BBC is getting ever harder. This is 'breaking news' from BBC News's main Twitter feed at the moment: 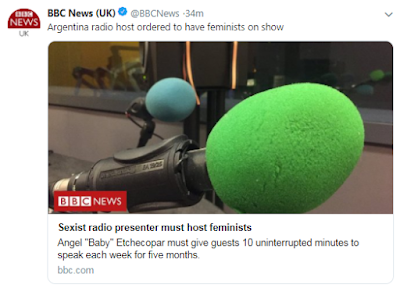 This is about a radio presenter in Argentina. Yes, Argentina. As you might guess, comments could be going better.

Of course, you could say 'Well, it's just Twitter', but no: The BBC News website has it as one of its top headline stories at this very moment. It's front page headline is Sexist radio presenter must host feminists (with no quotation marks around 'sexist'), and it comes just under another massive story (for the BBC) 'Halfwit' attacks Banksy's latest mural. .

In the BBC's report you'll find a classic example of:

42. Bias by Absent or Abbreviated Nomenclature. At the BBC the "criminal surname" is often reserved for people for whom we have a visceral hatred.

The offending radio presenter is just "Etchecopar". His critics get "Ms" placed in front of their names.

I'm so glad that the mocking comments below that BBC News (UK) tweet are so uniformly derisive. It adds to the feeling that the BBC is wildly out-of-touch with this kind of thing.

P.S. On that Banksy story, it's not often you see the word 'halfwit' on the BBC News home page. They 'borrowed' it from a comment from some angry chap on Facebook. The message seems to be: Don't mess with Banksy or the BBC will 'commit a hate crime' against you (at one remove)!
Posted by Craig at 22:43