On this morning's Today, just before the 8 o'clock news, Jonathan Dimbleby (brother of the more famous David) previewed tonight's Any Questions:

An airport shuts down; more homeless die; Trump drops another bombshell; Putin backs Brexit; Theresa May turns pantomime dame; Jeremy Corbyn provides rich pickings for lip-readers; cabinet ministers are openly at odds with each other but reassure us that troops will be on standby if needed. So a festive mood for our last programme of the year with Jacob Rees-Mogg, leader of Brexit's militant tendency; Joanna Cherry for the 'don't leave at any price' SNP; Shami Chakrabarti speaking for Labour's 'we have yet to decide' option; and former president of the CBI now chair of London First Paul Drechsler, who would just like some certainty please. This evening at 8 o'clock.

Of the phrases used to describe the four guests, you'll spot that Jacob Rees-Mogg got the insulting one and that, as far as the other guests go, Baroness Chakrabarti got a critical one, while - in contrast - Joanna Cherry and Paul Drechsler both got helpful ones.

Why was that? Was it because the latter pair are the clearest opponents of Brexit, so merit such 'helpful' introductions, while Jacob Rees-Mogg, as the clearest supporter of Brexit, merits nothing but mockery? And did Shami end up with a (gentler) ribbing because of her party leadership's refusal to come down clearly on the same side as Ms. Cherry and Mr. Drechsler over Brexit? Or is this all just conspiracy-theory-mongering?

Whatever, it wasn't a one-off from the BBC man today.

Here's Jonathan Dimbleby's introduction to the programme itself, coming live from London. And note who this time is the only guest to get belittled and mocked. (Spoiler alert: It's Jacob):


Joanna Cherry is a QC by profession but, nowadays, virtually fully engaged in speaking for her party, the SNP, at Westminster on justice and home affairs. Shami Chakrabarti came to prominence as the director of the human rights charity Liberty/ She's now in the Lords and serves the Labour Party Shadow Attorney General. Jacob Rees-Mogg chairs the European Research Group, which was instrumental in failing to topple Theresa May as his party leader last week. No less significantly he says, admits, acknowledges, he's never changed one of his six children's nappies. Paul Drechsler is deputy president the CBI (he was president before that), chair of the Bibby shipping line and, after running a number of major businesses, is now chair of London First, which campaigns to make the capital the best city in the world to do business. Our panel.

Yes, Ms. Cherry, the Noble Baroness and Mr. Drechsler got straightforward introductions, which none of them would have felt displeased by, from their BBC host. Only Mr. Rees-Mogg got the full 'Jonathan Dimbleby treatment'.

Besides the outright derision of "...was instrumental in failing to topple...", there was also the loaded 'colour' about him not changing his six children's nappies ("says, admits, acknowledges") .

And (girding our loins and listening on) who do you think got interrupted the most by Jonathan tonight? Yes, Jacob Rees-Mogg.

And who got asked the most challenging questions by Jonathan? Yes, Jacob Rees-Mogg - by a large margin (more than twice any one else).

And which panellist did Jonathan mockingly impersonate during one of the BBC man's many interventions? Yes, Jacob Rees-Mogg.

And who was the only panellist to get repeated questions about his personal integrity from BBC presenter Jonathan Dimbleby? Well, you might have thought Baroness Chakrabarti would have been first in line for that kind of treatment but, no, this is the BBC....so, yes, it was Jacob Rees-Mogg again.

My take on the stats for tonight's Any Questions runs as follows:

Anyhow, another very vital statistic was pointed out by Mr Rees-Mogg himself (on Twitter): 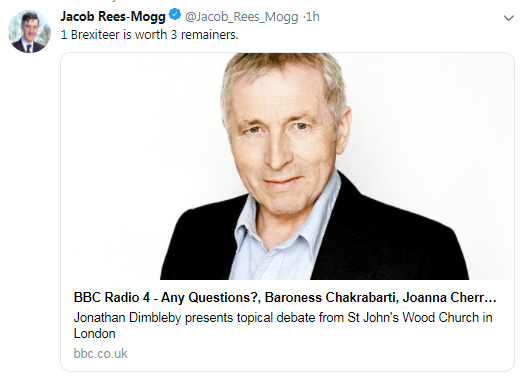 And when the Brexit question came up it very clearly was 3 Remainers (and the most vocal part of the audience) against 1 Brexiteer.

As I've said before, I rarely listen to Any Questions these days (having been a great fan in my youth), mostly because of what I felt was the bias of its presenter and production team. I dipped in tonight (purely for the blog's sake) - as I did a few weeks back - and found it exactly how I remember it: Biased.
Posted by Craig at 21:55