A blog that offers a weekly assessment of a particular BBC programme should continue to post about it even if no BBC bias has been detected in it - especially if  the blog is called Is the BBC biased? (with its question mark).

Now, yes, Sunday's intense interest in Roman Catholic child abuse is an ongoing bias on the programme's part (though perhaps a justifiable one) and a sculpture called 'Homeless Jesus' is just the sort of thing that would appeal to them, but the issues regarding Lord Saatchi's Medical Innovations Bill could not have been handled more fairly - both in Charles Carroll's report and Ed Stourton's subsequent interview with Sir Professor Michael Rawlins  and Iain Brassington (who took very different positions). 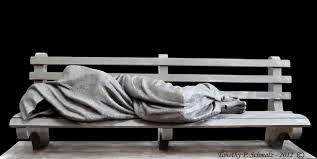 Plus 'Homeless Jesus', in fact, proved interesting. The sculpture (in bronze) is the work of Canadian Tim Schmalz and depicts a homeless man dossing on a bench covered in a cloth/blanket. The man's face cannot be seen.  He wanted to get away from that face, so that it becomes both Jesus and everyone. Approach it and look at his feet though, bearing the wounds of the Cross, and you realise it is Jesus. Tim, a Catholic, calls it "a visual translation of Matthew 25". He wants people to sit on the bench *uncomfortably* and would like it to be initially misconstrued as a real homeless person. Whether you see that as moving and provocative or demeaning, gimmicky and schmaltzy will be a matter of taste and/or judgement. Pope Francis has given it his blessing, and it will soon be found in Rome. Chicago and Washington already have casts. Sunday asked its listeners to suggest somewhere here. (Edward Stourton's back garden?)

The programme also talked to Foday Compey from one of its favourite charities, the Catholic organisation CAFOD, about the lockdown planned in Sierra Leone in order to combat the spread of Ebola. It's a highly unusual move and we can only hope it works.

I very much liked the feature on yew trees - a piece prompted by the Church in Wales' desire to preserve ancient yews for posterity. The report by the delightfully-named Sarah Swadling (oh please let Sunday make her do a nativity story this Christmas!) took us to St Cynog’s churchyard in Defynnog, Powys, and highlighted the fact that some of Britain's yews are much older than the churches they look after.

This one, according to ring-dating and DNA testing, appears to be 5,000 years old (preceding Christianity by over 3,000 years), and could be the oldest in Europe - though there is a rival claim from Scotland.

A couple of enthusiastic experts (including Janis Fry) were on hand, noting that the tree was planted on the north side of  an ancient burial mound though to have been constructed in honour of a neolithic chieftain. It is believed to have been an 'axis mundi' for the Celtic tribe thereabouts, connecting the planes of heaven and earth. The tree has a yellow sprig - a golden bough - that, according to Seneca, was used by people who wanted to communicate safely with the dead in the underworld. It is presumed that the church was built there because of the place's mystical associations. 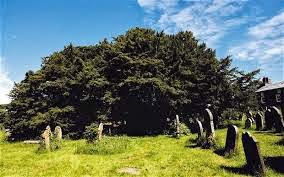 What with the possibility of a European war looming again over Ukraine, the rise of Islamic State in the Middle East (and numerous other mass-murderous militant Islamist organisations) ,the ever-growing threat of more Islamist atrocities on our own shores, growing chaos throughout the Middle East, the possible collapse of several nation states (possibly including the UK), the massive waves of illegal immigrants/asylum seekers entering Europe via Southern Europe, Iran's quiet progress towards possessing nuclear weapons, China's growing ambitions, etc, it sometimes pays to spend a while thinking about yew trees...

...or about entering a monastery (though that strategy didn't work in earlier days of darkness, like when the Vikings were doing their thing). The Archbishop of Canterbury, Justin Welby, is looking for a prior to lead a new 'monastic community' in Lambeth Palace. He told Edward Stourton that it will be formed from younger post-grad people, mainly Anglican but ecumenical, with the hope that they will eventually become leaders and serve in London ("active social service"). Archbishop Justin himself will be these nuns and monks' abbot. It will be called the Community of St Anselm (named after a Benedictine monk from Normandy). They are expected to be celebrate (which seems....fair enough). Intriguingly, there's already a Catholic equivalent established at Lambeth Palace called Chemin Neuf (Justin invited them there at the start of the year). That, of course, would be an ecumenical matter. Yes.