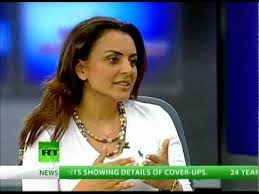 What has got into Dateline London recently?

After years of relentless, rather oppressive left-liberal consensus-building, the programme has sprung to life in recent months.

It's as if the real world has been invited in at last.

The results may occasionally be raw and rowdy but it is fascinating and revealing, and I am genuinely pleased.

Today's edition was particularly raw and rowdy (climaxing in a shouting match between Yasmin Alibhai Brown and Voice of Russia's Alexander Nekrassov, with one denouncing Russia and the the other denouncing liberals like YAB), but the heat at least generated a good deal of light too.

We heard a clash of sharply contrasting perspectives, which - to be slightly unfair to all of them - can be characterised as follows: those of a mainstream American journalist, a mouthpiece for the Russian government, a mouthpiece for the Saudi government, and...well...a big mouth - namely ABC reporter Jeffrey Kofman, Voice of Russia's Alexander Nekrassov, Arab journalist Mina al-Oraibi, and the Independent's Yasmin Alibhai Brown.

For the first time in all the years I've been watching it, Mina al-Oraibi of the Saudi-backed Asharq Al-Awsat newspaper was outed as being (essentially) a Saudi mouthpiece. (I've seen her as that for some time). She usually gets a very easy ride but today she was outed by Yasmin Alibhai Brown (of all people). YAB really went for the pernicious influence of the Saudi government, pinning a good deal of the blame on them (and Qatar and Kuwait) for the rise of Islamic State, and denouncing the influence of Wahhabism everywhere (including in the UK). She clearly had Mina in her sights as she did so. Mina did the expected and tried to defend the Saudis and deflect attention elsewhere in response. Yasmin refused to allow her to get away with it, even (to my astonishment) sticking up for the West at one point when Mina tried to pin the blame on us.

Every couple of years YAB does something surprising like that (though perhaps it's not that surprising, on reflection, as she identifies herself as a Shia Muslim).

This felt like a reflection of two key positions in the present crisis in the Middle East (one pro-Saudi, one pro-Iranian), with a Russian and American perspective laid on top.

The programme was like that throughout. Very interesting, and so unlike the Dateline of one, two, three, four - and especially - five years ago.

All that was missing was a firmly pro-Western right-winger - which isn't so unlike the past!
Posted by Craig at 19:30