This morning's Today was really quite a pleasant listen, once you got past all the gory news. It wasn't entirely free from bias though.

It covered much of the heavy stuff, dealing with Ukraine and Islamic State at some length, plus Ebola in Sierra Leone, the badger cull, a development v environment controversy in Kent, the successful parliamentary revolt over the 'bedroom tax' and, occupying the 8.10 spot, the immigration crisis in Calais.

There was also time for lighter subjects, like James Naughtie visiting a whisky distillery on Skye that one of his ancestors used to own, an interview with the archdruid at Stonehenge about President Obama's visit to the site, a 'telepathy'-based science story, a debate about long/short novels, and an interview with John Cale of Velvet Underground fame.

Still, John Humphrys then interviewed Michael Howard MP (Conservative, as if you didn't know). Mr Howard was firm on the principle that these would-be immigrants to Britain should not have got this far in the first place and should have sought asylum in the European country they first set foot in. John Humphrys (home in Greece) said that that country is usually Greece and that Greece is too small to take in so many people and has too many problems anyhow. Mr Howard, ever so politely, pretty much said, "Tough!" and that Greece should have controlled its borders in the first place. 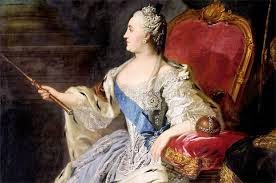 On the question of Ukraine, we got an interview with the BBC's Bridget Kendall and a report from Donetsk  by Richard Galpin, introducing me to the Russian separatists' apparently Putin-inspired vision of Novorossiya ('New Russia') - a name harking back to the days of Catherine the Great. The empress created a Black Sea governorate from land conquered from the Ottomans back in the 18th Century, and that Tsarist governorate's flag is the one the eastern Ukrainian rebels have been flying in the past week or so. Then came an interview with a Ukrainian government spokesman who said the people calling for Novorossiya - which would stretch from from eastern Ukraine to Moldova, in the most fanciful vision - were neo-Nazis. [Everyone's a neo-Nazi out there, if you believe the other side].

The discussions of Islamic State (and related matters) brought us an interview with a Guardian journalist, Jason Burke. He finds the jockeying for position between Islamic State and al-Qaeda fascinating. They have different strategies, he said. Personally, I find both of them revolting. Later came a discussion between former US administration advisor Ali Khedery and Labour's Lord Mark Malloch Brown (former UN Deputy Secretary-General). Mr Khedery was fascinating and full of insights. (He wasn't very impressed by President Obama's failure to have a strategy, either now or since he was elected). Lord Malloch Brown was less interesting (as ever).

The badger cull interview was with Professor Rosie Woodroffe of the Zoological Society, a critic of the government on the issue. She duly criticised the government on the issue. John Humphrys seemed woefully underprepared, mis-introducing her as if she were a government supporter on the issue who'd previously been involved in these culls. She had to correct him straightaway, saying, no, she hadn't been involved. He then asked her a first question - "Since it didn't work, why are we doing it again?" - from the, 'harrumph, your scheme was a flop' angle, when it wasn't her scheme and she's an arch government critic on it! Not John Humphrys' finest hour. [No supporters of the cull were featured today].

The 'bedroom subsidy'/'spare room tax' thing {sic, before you ask} took the form of a 'Yesterday in Parliament'-type piece from Mark D'Arcy. I always imagine Sarah Montague swishing her fan whenever a Mark D'Arcy report comes on.

The 'developers v environmentalists' featured followed a typical news item from Roger Harrabin (in the news bulletin) full of the entrancing sound of nightingales singing. Medway Council wants to build houses where nightingales are presently residing in surprising numbers. Roger's report (more than) suggested where his sympathies lie, but the discussion on Today was balanced between a Labour councillor who supported the development (Vince Maple) and an environmentalist from the RSPB (Martin Harper) who objected to it. Medway Council say the nightingales will be relocated to a wood somewhere fairly nearby. So, a debate between those concerned about the housing crisis in the South East [caused by....???....ahem, BBC???] and those appalled about moving an endangered species from their long-established habitat. I can't see any concerns about how Today [proper] handled it here. [Less so Roger H.]

Onto the light stuff, Sarah Montague's interview with Velvet Underground co-founder John Cale (with his ever-so-distinctive voice) was a curate's egg. John Cale has devised a concert at the Barbican where drones will fly over the audience during his band's performance. I'm still not entirely clear why, though the effect sounded avant-garde [like the VU's White Light/White Heat album]. My problem with this interview was that Sarah moved on too quickly to his relationship with Lou Reed and the VU's glory years - to John Cale's obvious discomfort. He remained polite and interesting though as he repeated for the umpteenth-thousandth time the answers to Sarah's beginners-grade questions. I cringed on his behalf though. [It doesn't help that SM reminds me of the sort of character Joyce Grenfell would play. Such a character interviewing John Cale isn't an ideal mix].

Much more at home was James Naughtie visiting that ancestral whisky distillery on Skye. This was a very engaging feature [loosely based around the Scottish independence referendum], though I have to say its best moment came afterwards when a knowing John Humphrys quipped, "Well, that was one of those stories Jim didn't have to be forced to go into. I bet they didn't drag him kicking and screaming to that one!" (I suspect not either.) 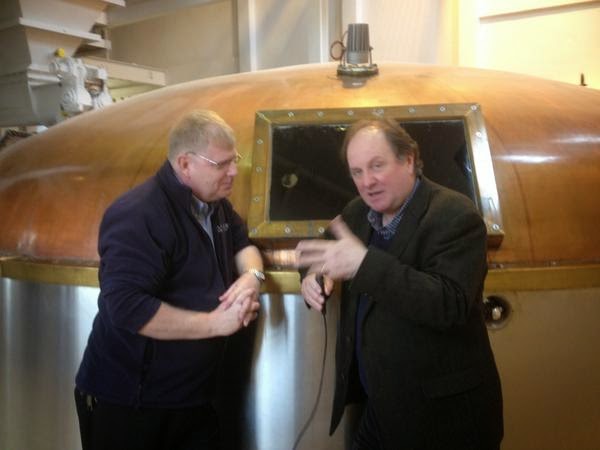 I noticed that quite a few Twitterers were making jokes about Jim looking as if he'd enjoyed a fair few samples already by the time the above picture was taken....

....and talking of Twitterers, a modest sprinkling of them used 140 characters (or less) to fume about the feature on Barack Obama's visit to Stonehenge. BO (if I may call him that) had pronounced, like the statesman he is, "How cool is this. I'm at Stonehenge", and said he could now tick it off his to-do list of places to see. (He's known for his depth). Some Twitterers found this feature trivial. Most, however, objected to Sarah Montague's short interview with Archdruid Terry Dobney, 'Keeper of the Stones' at Stonehenge. They didn't like His Archdruidness talking about ley lines and other mystical stuff. Some complained to Richard Dawkins about this pandering to irrationality on BBC Radio 4's part. Sarah was pretty 'arch' herself here, encouraging Terry to say that NATO should have held its conference at Stonehenge and that peace might have resulted as a..er..result.

And then, to top that, horror of horrors!, came a piece about telepathy. [Richard Dawkins on Line One! Richard Dawkins on Line One!] This was a science piece, surprisingly, and Today interviewed theoretical physicist Guilio Ruffini of Harvard University. It was deeply intriguing but also deeply bemusing. Sarah Montague (in typical Today fashion) went all 'wowwy!' on us. (Why do Today interviewers like Sarah and John Humphrys do that?) She clearly hadn't the foggiest idea what was going on but sounded happily gobsmacked by it all. That wasn't very helpful to the listener though.

Finally came that debate about the length of novels. It was between Simon Spanton of Gollancz Publishing and science fiction writer Peter F. Hamilton. The latter writes long novels (1.2 million words for one of them, apparently). The average, it appears from further research, is much lower. According to the Huff Post research suggests that Huxley's Brave New World lies pretty much exactly midway with 64,531 words. War and Peace has 544,406 words.

Oh, and Thought for the Day managed to mention The Great British Bake Off.
Posted by Craig at 23:14