'We get complaints from both sides, which shows we're getting it about right'

As David was saying in the comments yesterday, the fact that the BBC gets complaints of bias from both sides on a contentious issue (like Israel-Gaza, Scottish independence, climate change, etc) doesn't necessarily mean that the BBC isn't biased on those issues.

Just because both sides say they are biased it doesn't necessarily follow that both sides are wrong. One side could be wrong; the other right.

Still, none of that will prevent BBC editors from continuing to appear on programmes like Newswatch or Feedback and repeating the mantra that 'We get complaints from both sides, which shows we're getting it about right', over and over again. They clearly think it's a knock-down argument.

As does Jon Donnison. He has just re-tweeted a page from BuzzFeed showing the most complained about things last month on the BBC, as shown on the corporation's internal log: 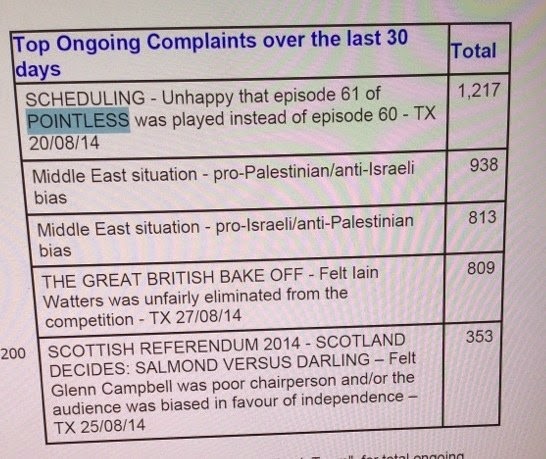 He then re-tweeted a comment from someone else, making the expected point:


In other words Jon Donnison (of all people) is asking us to take this as proof that the BBC is not biased on the Israeli-Palestinian issue because roughly equal numbers of people have complained from both sides - even though most of the complaints of pro-Israeli BBC bias are likely to have been either crude or silly [if Twitter is anything to go by] - such things as that the BBC has interviewed someone pro-Israeli [like Mark Regev], that the BBC hasn't used the proper PSC terms of abuse about Israel [like "occupation" or "genocide"], or that the BBC is run by Jews, etc. [I have even see a few tweets accusing Jon Donnison of being pro-Israeli]. Set such complaints (or the foam-flecked cherry-picking of Media Lens) besides the patient, forensic dissections of BBC reporting from Hadar at BBC Watch and you can perhaps begin to see the difference between quantity and quality as regards complaints about BBC bias.

Still, that BuzzFeed page does offer an enticing glimpse at the secret world of the BBC's internal logs of complaints. Here, for example, is an image of the page relating to complaints about Doctor Who: 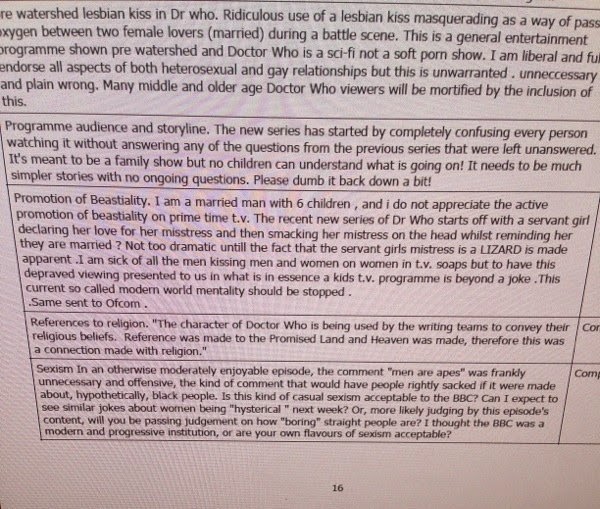