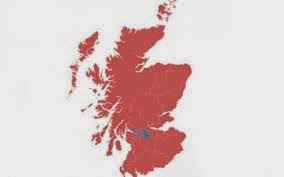 There were four guests. Two were from left-wing newspapers, namely Kevin McKenna of the Observer and Catherine MacLeod of the Herald, and two were from right-wing newspapers, namely Iain Martin of the Telegraph and Celia Maza de Pablo from the Madrid-based La Razón. Of the UK-based journalists, that roughly translates as one pro-SNP, one pro-Labour and one pro-Conservative.

That's where the balanced stopped though. There was an evident pro-union bias in that guest selection: Kevin McKenna voted 'Yes'; Catherine MacLeod is close to Alistair Darling and, presumably, voted 'No'; Iain Martin, though Scottish, couldn't vote because he lives in England, but would have voted 'No' if he could; and Celia Maza de Pablo (whose paper La Razón is a Spanish nationalist/monarchist newspaper) held the 'No' vote to have sent an important (negative) message to the pro-independence Catalan government.

Still, the discussion was lively, interesting and marked by disagreement - especially between Kevin McKenna and Iain Martin.

The thing that stood out for me though was Celia's statement that many Spanish newspaper have been featuring around ten pages on the story every day, such is the interest in the story there. (Spain, after all, has its own independence movements.) That Spanish appetite for Scottish referendum stories seems to have eclipsed that of most Brits. I have to say that I can't see our newspapers showing such interest in Spanish affairs - even if Catalonia won independence.
Posted by Craig at 15:10