Blink and you’d’ve missed it. I nearly did, but ‘Mr. Sue’ happened to be watching BBC 1 last night, and spotted with eagle-eyed acuity that the upcoming programme was Jane Corbin’s elusive Panorama “War of the Tunnels.”   He woke me up!

Because, dear reader, I was fast asleep. Early to rise etc. etc.
I tried to put myself in the shoes of Mrs Average Viewer. You know, the kind with a casual, non committal interest in the subject.  I kept thinking “But Corbin didn’t mention this” and “What about that?” which I suppose Mrs A V might not have done. Or would she?

I wanted to see whether the Guardian-reader-in-the-street I keep bumping into would come across anything revelatory in the programme, preferably something that would ease his passionate loathing of Israel.

However, and it’s a big however, on the whole the programme did indeed show several things that the BBC has previously tended to downplay or deny, such as the fact that Hamas was indeed responsible for kidnapping and killing the three Israeli teens, and that Hamas launched rockets from heavily populated areas and so on.

But we knew that. Perhaps the un/non committed viewer might have caught a glimpse of something in Israel’s situation that they otherwise might have missed?

Although it was a revelation in itself that Panorama would make a programme about tunnels, let alone refer to them as ‘Attack Tunnels”, there was still that unequal weighting in the form of ‘emoting‘ television we’re accustomed to. We might callously call it the dead baby factor.

There was comparatively little empathetic footage of the tribulations of the Israeli-in-the-street; what there was appeared almost laughable, for how could anyone look first at a pile of rubble that once was a house and a street, and then at a small hole in a roof of an empty house, in order to fully  understand the continual long-term state of apprehension and fear that at any moment a missile might fall out of the sky and kill you or your loved ones?
Please don’t forget, Hamas’s stated aim is to get rid of you.

Jane Corbin did have to take cover whilst in Sderot, “Lie down!” “Shouldn’t we get outta here now?” - and she appeared suitably frightened; but that didn’t quite convey the stress of living under the threat of permanent, random, sudden death.

There was also a little too much empathetic film of one particular Palestinian-in-the-rubble.
Female Palestinian journalist Asma al-Ghul’s distress was affecting.The emotional value of her words as she accompanied Jane Corbin and kept referring to Israeli war crimes was hardly matched by the clinical testimony of a rather cold  Israeli politician  Yaacov Perry, whom Corbin introduced as an “Israeli government minister and former spy chief.” Hardly endearing.

Asma’s anger at Israel was taken at face value, as though Panorama expects its viewers to accept that having many Hamas ‘relatives’ is a mere irrelevance in the context of the death of “that” innocent uncle.

Yaacov Perry addressed the topic in the title of the programme. The Tunnels. Anyone who had hoped to learn more about the tunnels, their extent, their cost and their purpose might have felt disappointed. Jane Corbin said:
“An Israeli commander took me into one of Hamas’s attack tunnels, which emerges between two Israeli villages.”
“The tunnels are lined with cement, a precious commodity in Gaza, which Israel has tried to restrict with its blockade.”
The Israeli commander mentioned the quantity and the monetary value of the cement used in this endeavour, but neither he nor Corbin spoke of the cost to the people of Gaza - that the stolen material deprived them of the means to repair their houses, or the obvious fact that the ‘concrete’ existence of tunnels justified the restrictions imposed by the Israelis. Doh!

“What a huge investment of time and money Hamas had made in these tunnels, dug by hand” not to mention the 160 lives sacrificed by children in the process.

Khaled Meshal was shown telling lies and accusing Israel of telling lies - would the viewers realise the one or believe the other? However, he did admit that Hamas was responsible for abducting and killing the three Israeli teenagers  (Jon Donnison, take note) “In the context of self-defence, against Israeli occupation and settlement policies” he said, and we did get to hear that the al-Wafa Hospital was a Hamas headquarters, and had been evacuated before being hit by Israel.
Some pro-Palestinian activists say the IDF are lying about this, and dispute aspects of a video,which is almost paralleled by a clip we’re shown near the opening passage of this programme, footage of the aftermath of a bombing that has also been given a frame-by frame deconstruction and accused of being mere ‘Pallywood.’ 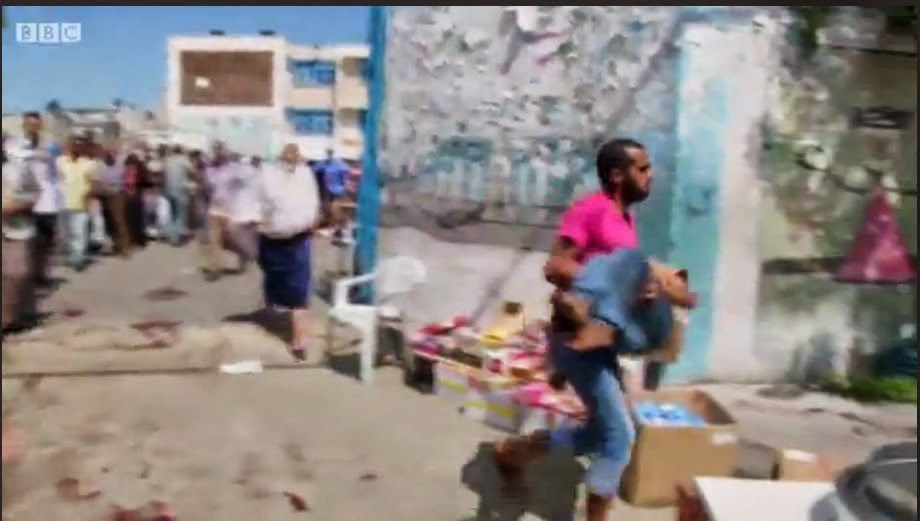 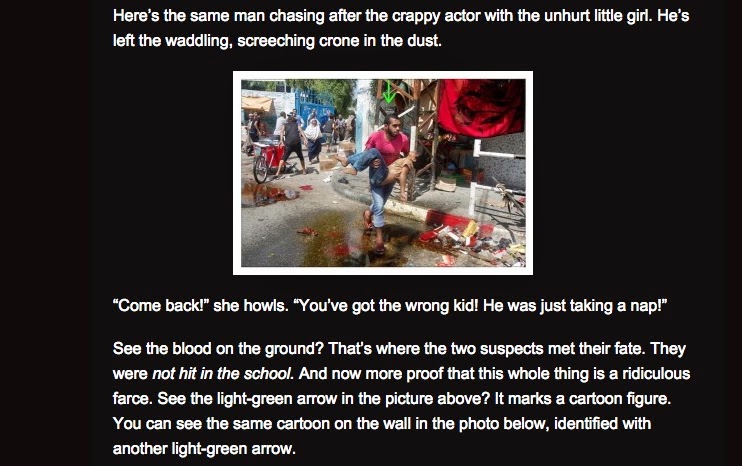 “These tunnels were built in self-defense against a technologically and militarily superior power” said Meshal. If you believe that, you’ll believe anything I thought, still in the shoes of the average viewer. “We don’t target Israeli civilians,” he says, “and we don’t have smart sophisticated weapons like the Israelis have,” he continued ambiguously.  “Give us such weapons and we’ll only target Israeli military.” So - do you or don’t you? Mrs A V might wonder.

A paramedic accused Israel of a war crime - targeting an ambulance, but we heard nothing of terrorists using ambulances.

Lt Eitan was the most engaging interviewee of the Israelis. He was handsome, sincere and distraught at the loss of his friend Hadar Golding, the soldier who was dragged off through a tunnel and killed. “the tunnel was booby-trapped with explosives” said Jane.

“By the beginning of July it was all-out war. Hamas has launched rockets from built-up areas of Gaza, as their own video shows.” said Jane. I should imagine the pro-Palestinian viewers will be up in arms at anything they perceive as being sympathetic to Israel. I can hear them protesting that Gaza is the most densely populated area in the world etc etc., and Hamas had no choice etc etc.

“Just 27 miles long, the Gaza Strip is home to 1.8 million Palestinians. It was occupied by Israel until 2005.
I was in Gaza two years later when Hamas took charge, ousting the more moderate PA government. (footage of Hamas marching and singing military song)
“Hamas is considered a terrorist organisation by Britain, America and Europe. The militant Islamist group have sworn to destroy Israel. When Israel imposed a blockade on Gaza Hamas dug tunnels into Egypt to smuggle in everything from household goods to weapons. Last year when a new Egyptian government destroyed those tunnels Hamas lost its economic lifeline, seriously affecting its ability to govern.  By the start of this year Hamas couldn’t pay the salaries of its public workers, and its leader warned the people of Gaza there were hard choices to be made.
“Hamas was preparing for a showdown with Israel. To ease the blockade they claimed was strangling Gaza. The trigger was pulled. Not in Gaza, but in the occupied West Bank, near Hebron in June a Hamas cell targeted three Israeli teenagers hitching home from boarding school into Israel. One of them was 16 year old Naftali Frenkel.”

That was Corbin’s curate’s egg monologue.

Make of it what you will. I do wonder if anyone else happened to watch this stealthy Panorama, or has it sneaked past its critics unnoticed?
Posted by sue at 17:34