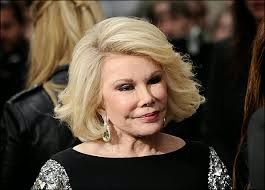 Putting my outsized cigar aside for a couple of minutes, here are some classic lines from Joan Rivers:

My daughter and I are very close. We speak every single day and I call her every day and I say the same thing, “Pick up, I know you’re there.” And she says the same thing back, “How’d you get this new number?”

The whole Michael Jackson thing was my fault. I told him to date only twenty-eight-year-olds. Who knew he would find 20 of them?

Bo Derek turned down the role of Helen Keller because she couldn’t remember the lines.

And here's the BBC's attention-seeking Jon Donnison, tweeting about her today:

Much being said about Joan #Rivers being "outspoken" and "risqué." Few mentioning that she was also a racist.
— Jon Donnison (@JonDonnison) September 4, 2014


Obviously not his sort of kind of comedienne then. Her being so strongly pro-Israel probably didn't help.
Posted by Craig at 18:28