Piercing questions are out? 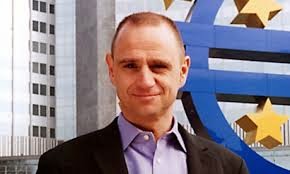 The piece, by Bryony Gordon, mentions the issue of bias:

Evan Davis was born 52 years ago in Malvern, Worcestershire, to South African parents. He grew up in Surrey, attended Dorking County Grammar School, and got a first from Oxford in philosophy, politics and economics, before studying public administration at Harvard. He was a member of the SDP while he was at Oxford, but it would be wholly inaccurate to accuse him of typical BBC Left-wing bias – his first job was as an economist at the Institute of Fiscal Studies, a Right-wing think tank, where he was one of the architects of Margaret Thatcher’s Poll Tax. He has also crossed picket lines during his time on the Today programme.

Does he ever get tired of having to toe the line of BBC impartiality? “No. I genuinely find myself interested in trying to see both sides of the argument. I just think that is an intellectually interesting thing to do. If I was outside the BBC, I wouldn’t be writing polemics on one side or the other. I would be trying to understand the geography of the argument.”

Well, describing the Institute of Fiscal Studies as "a Right-wing think tank" is wrong for starters and would horrify the IFS (which, like the BBC, insists that it is strictly impartial.) And calling Evan "one of the architects of Margaret Thatcher’s Poll Tax" is going too far too, given his apparent 'backroom boy' role in it.

I've always suspected him, given his Social Market Foundation role [and everything I've ever seen of him], of being a vaguely Blairite, pro-business, pro-EU, pro-immigration type.

Still, as a counterpoint to Bryony [and me], here's Virginia Blackburn in the Express:

When Davis first joined Today I was a fan. He was calm, rational and incisive, explained complex issues clearly and seemed a thoroughly good egg. But two incidents in recent weeks have shown his true colours. In the first he was allowed to get away unchallenged with saying that the coalition's (for which read Tories') austerity programme had failed.

As Davis must know perfectly well Britain's economy is not only thriving but is doing better than any other country in Europe.

Secondly in talking about the Scottish referendum last week he quoted Boris Johnson, before adding, "If you care about what he thinks."

Eh? Whatever you think of Boris he is a hugely important politician who may yet end up as prime minister. When Davis quotes a Left-wing politico does he add, "If you care about what he thinks"? You guess.

Davis, along with other senior BBC bigwigs, has his own political agenda which he is trying to foist on us despite the BBC's alleged "impartiality". What a joke that has become.

Evan is clearly fully on board with Ian Katz's rejection of Paxman-style interviewing - despite his own record of incessantly interrupting and imposing his own agenda on interviews on Today [beams in eyes, and all that, apparently]:

His new editor, Katz, has written in the Financial Times about the death of the political interview, blaming it partly on the aggressive style of Paxman. Davis would never be so tactless as to say that out loud. “I think the danger is that journalists have become so full of themselves [in believing that they are] the people who in our constitution have the job of holding the b------s to account, that they’ve forgotten that there are a million other ways of having a useful conversation with people.”

Actually – and here’s something you could never imagine Paxman saying – Davis believes that politicians today are over scrutinised. “Not just by us, but by other politicians, too. I think we might have slightly too short-termist a political culture. The crowd is standing there with score cards watching everything they do, and that trains them to be rather defensive and cautious. I think in the end that’s not helpful.

“You don’t want politicians to be worrying about the Sunday papers rather than life after the next election. It’s possible that we are holding our politicians to account to such a degree that we’re almost paralysing them. They can’t think aloud. They can’t even eat a bacon sandwich in a natural way.”

We'll see how he gets on. [Well, the few people who still watch Newsnight will see anyhow].
Posted by Craig at 17:46