Just a few random thoughts tonight, as I seem to be capable of little else today. (It's been a bad day. Please don't take my picture).....

Let me start by saying that I've rarely watched Horrible Histories, the popular CBBC history programme, but I have listened to/read a number of interviews with its guiding spirit - children's author Terry Deary, so that makes me an expert.

Mr Deary is a self-declared "anarchist" who regards school as a "waste of time" and openly rejoices in being able to plant "subversive" and "radical" messages in children's minds and, by the sounds of it, CBBC's Horrible Histories attempts to hold true to his vision.

To many who have watched and listened to the BBC for a long time, the 'subversive' and 'radical' messages Mr Deary strives to project have long seemed like orthodox, BBC-approved views - the kind of views that lead like-minded BBC commissioners to commission 'subversive' programmes like Horrible Histories rather than conservative takes like, say, Great Uncle Craig's Great Patriotic British Histories [which would have featured me dressed up as Alfred the Great, Winston Churchill and Queen Elizabeth I]...

So does the corporation's happy acquiescence in the promotion of that most oft-cited prime example of 'politically-correct history' in the UK - (black) Crimean War nurse Mary Seacole, famously advanced by 'leftist educationalists' at the expense of 'The (white) Lady with the Lamp', Florence Nightingale, all in the interests of multiculturalism... 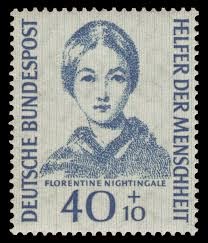 The T.V. incarnation of Horrible Histories portrayed Florence Nightingale as a racist who was responsible for blocking Mary Seacole's progress in the medical profession because she wasn't British ["'Four times me tried to join Old Lamp-Face's nurses in the Crimean War, and four times she said no'] - something for which there's not the slightest shred of evidence.

The BBC Trust - after a typically long and gruelling complaints process for the complainants [from a Florence Nightingale society] - found the programme "materially inaccurate and...therefore in breach of the Editorial Guidelines on Accuracy". The sketch has now been withdrawn from the BBC's Learning Zone and the Horrible Histories episode in question won't be broadcast in its original form again...

...which, again, shows that relentless pursuit of the BBC can bring about results [though I don't see much beyond the usual suspects...the Mail, Telegraph, blogs like this...reporting the Trust's findings].

Now, smearing Florence Nightingale in the interest of promoting a left-wing agenda isn't a case of right-wing bias, is it?

[For those wanting a proper historical take on the Florence v Mary spat, please read this from History Today. It also makes clear just how involved the BBC has been in taking sides in the vilification of Florence Nightingale].

The BBC's Editorial Standards Findings (published monthly) are always revealing. It seems that few people actually read them, except bloggers like me and Hadar at BBC Watch...and the occasional eagle-eyed Beeb-basher at the Telegraph and Mail.

The latest findings feature something I've not seen before...

Unlike the heavily-hedged, partial upholding of the complaint about Flo, there's a remarkably unambiguous, completely unhedged denunciation of BBC bias from the BBC Trust this month.

The guilty BBC party, Richard Spendlove of BBC Radio Cambridgeshire, has been given an unequivocal, feed-him-to-the-lions thumbs-down from the BBC Trust.

What had he done that so offended the BBC Trust? Had be played The Sun Has Got His Hat On?

During a phone-in programme about the British marine who shot a Taliban captive, Mr Spendlove was deemed far too sympathetic to a caller who expressed support for the British marine - worse, a "potentially offensive caller" (in the words of the BBC Trust).

Richard Spendlove was also deemed to have "made some potentially offensive assumptions that everyone listening would subscribe to a Judeo-Christian viewpoint" - assumptions that obviously offended the BBC Trust.

Have we finally found our conservative, pro-British patriot at the BBC? If so, well, so, unfortunately, have the BBC Trust, and they aren't at all happy with him. A spell in a BBC re-education camp awaits, no doubt.

Not such a bad day though that I didn't snigger at Evan Davis's debut on Newsnight last night.

What follows will be as superficial as anything in Ian Katz's dreams (and serious analysis can wait for a few days)...

I used to like a BBC series called Great British Journeys presented by Coast's umbrella-carrying Nicholas Crane. One part of its appeal was the way it welded historical detail with scenic walks. The second part of its appeal - and one that used to make me laugh - was the way it managed to put Nicholas Crane into every single frame of the entire one-hour programme. He was never out of shot. Not one landscape was ever lingered over without Nicholas Crane striding over it somewhere - either close up or far in the distance. No sheep, cow, or passer-by was even given its five seconds of solo fame. The producer obviously felt that even a millisecond without Nicholas Crane on screen would ruin the entire series.

I mention that because Newsnight editor Ian Katz obviously felt the same way at the start of last night's Newsnight - the Newsnight which marked the debut of his star signing, Evan Davis - and, boy, Ian Katz certainly wanted us to know about it.

There was Evan from the word go, pacing about (like he does on Dragon's Den), then shaking hands and sitting down with David Cameron, then walking towards the camera, then standing still, then introducing his new catchphrase, "Hello, hello!". Then his report: Here's Evan walking towards the conference, looking down from a balcony, walking down some stairs, talking to some Tory activists, shaking hands with a Sikh in the distance, stood on another balcony, stood on the conference floor, walking towards Allegra, listening to Allegra, laughing at Allegra's jokes, then walking away from Allegra towards the camera, then - and what bigger way to mark your debut? - interviewing the Prime Minister of the United Kingdom (er, David Cameron).

Sticking with superficial, the programme had a fair few embarrassing 'dead' moments, Evan was trying too hard to be light-hearted (in front of a stony-faced panel), and poor tieless TUC Duncan was left looking like a spare part after Evan left him at the altar (so to speak).

It looked a bit amateurish, but wasn't. It was a fully professional attempt to look different that didn't quite come off.

Still, to sound a final positive note, I am very impressed so far with Neil MacGregor's new series on Germany, Germany: Memories of a Nation. So far, so excellent.
Posted by Craig at 22:32