Banksy gets the bird 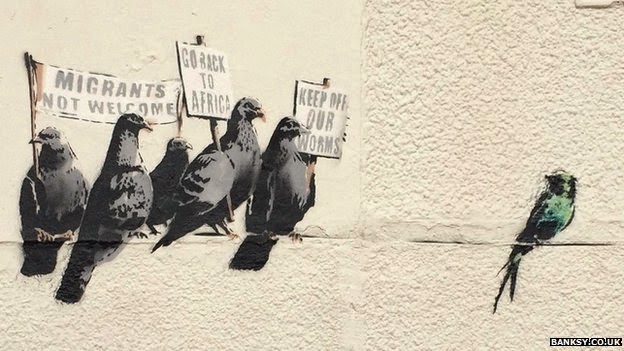 Just before 4 o'clock this afternoon the BBC News website published an article about a new Banksy, which it doubtless considered germane to the Clacton-on-Sea by-election:

A new Banksy mural showing a group of pigeons holding anti-immigration banners has appeared in Essex.
The mysterious artist posted two photos of the work on his website, stating that it is in Clacton-on-Sea.
Four pigeons are shown holding signs including "Go Back to Africa", while a more exotic-looking bird looks on.

One hour later, that article changed and became:

A new Banksy mural showing a group of pigeons holding anti-immigration banners has been destroyed following a complaint the work was "racist".
The mural in Clacton-on-Sea - where a by-election is due to take place following the local MP's defection to UKIP - appeared this week.
It showed four pigeons holding signs including "Go Back to Africa", while a more exotic-looking bird looked on.
The local council, which removed it, said it did not know it was by Banksy.
Tendring District Council said it received a complaint that the mural was "offensive" and "racist".
The artist, who chooses to remain anonymous, posted pictures of the work on his website earlier.
But by the time it had been announced, the mural had already been removed due to the complaint received on Tuesday.
Nigel Brown, communications manager for the council, said: "The site was inspected by staff who agreed that it could be seen as offensive and it was removed this morning in line with our policy to remove this type of material within 48 hours.
"We would obviously welcome an appropriate Banksy original on any of our seafronts and would be delighted if he returned in the future."

I'm with Ed West on this one:

Who is the more dull-witted? The equality/diversity council official who cant detect irony, or the lazily obvious political artist?
— Ed West (@edwest) October 1, 2014