“The Palestinians accuse the Israelis of genocide” Yeah, but
“Israel sees its armed forces as the most moral in the world” and
“Israel calls Hamas ‘terrorists’ whose every operation is a war crime” Mmm, but
“Hamas sees its resistance to occupation as legitimate.” Yeah.

That’s one way of establishing false moral equivalence between Hamas and Israel.

“The Palestinians accuse the Israelis of genocide”
.........and, purportedly, on the other hand:
“Israel sees its armed forces as the most moral in the world. Israel calls Hamas terrorists whose every operation is a war crime.”
...............But:
“Hamas sees its resistance to occupation as legitimate.”

In case you haven’t already spotted it, that was a snippet cherry-picked from BBCWatch’s article
about ‘political warfare’; to be more precise, it was plucked from John Humphrys’s introduction to Kevin Connolly’s report on 8th October, Today R 4, a version of which also appears online.

Both Connolly’s parti pris approach and Humph’s brief introduction exemplify the BBC’s default attitude to ‘Israel / Palestine’. I think it also shows how, once a grain of an unjust premise takes hold, the injustice compounds till the truth is turned on its head.

John Humphrys speaks of the Palestinians (Hamas) and the Israelis as though they are two naughty children. “One’s as bad as the other” he seems to be thinking, “How exasperating for everyone.”

The Palestinians certainly do accuse the Israelis of genocide. Well, if Mahmoud Abbas says it is so, why wouldn’t they?
But as the BBC states:

“Genocide is understood by most to be the gravest crime against humanity it is possible to commit.  It is the mass extermination of a whole group of people, an attempt to destroy an entire group and wipe them out of existence.” 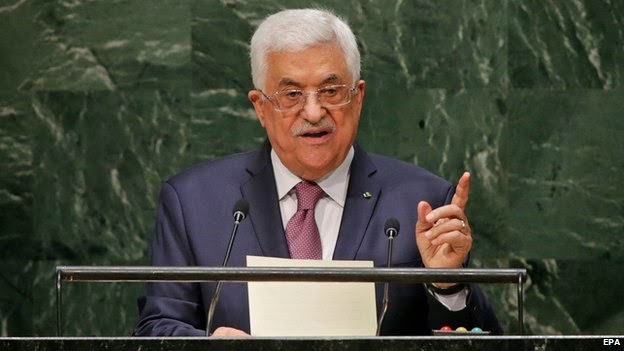 Not, one would think, a term to be bandied about lightly, disseminated, or worse - given credibility and fertilized with ‘the oxygen of publicity’ courtesy of John Humphrys on the Today programme.
Clearly, giving credibility to Abbas’s outrageous ‘genocide’ accusation is at best mischievous, but pitting it against the IDF’s ‘morality’ or otherwise is devious and, well, immoral.
Israel certainly does see its armed forces as the most moral in the world, and so do many others, including military experts, particularly but not exclusively Col. Richard Kemp.

Even Rachel Shabi, well-known for her anti-Israel contributions to the Guardian wrote in 2009:

“Israelis are deeply irked by the seeming global habit of routinely condemning IDF soldiers while turning a blind eye to the practices of other armies, elsewhere. This is fair enough to some degree: if you're going to take the moral high ground over Israel, it helps that you aren't standing on a mound of dead bodies of your own making (Iraqi, Afghani, take your pick).”

Of course there’s a “but” next....... but......but yeah.
It is well-known that Israel takes measures to warn Gazan civilians of impending airstrikes and aborts missions where the risk of civilian casualties is thought to be too high, which is more than other armies are known to do, even if too many civilian deaths occur because Hamas deliberately gathers civilians together to shield their own ‘militants’ and forces family members to disregard warnings to evacuate, and makes them stay put.
“Israel calls Hamas terrorists whose every operation is a war crime.”

Well, as Hadar points out, as she is obliged to do so very many times, it’s not only Israel that calls Hamas terrorists.

“Hamas is designated a terrorist organisation by Israel, the US, EU, Canada and Japan due to its long record of attacks and its refusal to renounce violence. Under the group's charter, Hamas is committed to the destruction of Israel.”

Of course the BBC follows this with a “but”, but, but....but still.

“Hamas sees its resistance to occupation as legitimate.”

So what? So does ISIS, and and so do all Islamic-Jihadi outfits, from al-Qaeda to ones beginning with Z; that is, if one defines ‘occupation’ as ‘presence of the unbeliever / infidel in Muslim lands’ as they all so clearly do. And if one sees beheading hostages, sending missiles towards civilians, blowing up school buses etc etc as ‘resistance’, let alone legitimate, it’s hardly a reasonable point for the BBC to make in the context of putting Hamas’s case to the audience, if only to help them ‘understand’ Hamas.

As Hadar says:
“The BBC knows equally well that the Gaza Strip has not been under “occupation” for over nine years and that Hamas’ so-called “resistance” is aimed at ending the existence of Israel.”

It seems to me a glib, almost deceitful way of insinuating that Hamas and, for that matter all the Palestinian “resistance” fighters have legitimate grounds for attacking Israel, namely that even if Israel isn’t militarily occupying Gaza, its very existence violates “Muslim” land, and justifies ongoing aggression.

Giving equal credence to Israel and Hamas may well be the BBC’s ostensible tribute to impartiality, but over a period of time this attitude has fostered mass cognitive dissonance, in which we find otherwise intelligent people identifying with and supporting Islamist Jihadi groups, which are pledged to eliminate Israel, (particularly but not exclusively Hamas and Hezbollah) whilst at the same time the very same people are urging Western military intervention in the form of airstrikes - collateral damage or no - to defeat the so-called Islamic State or ISIS or ISIL, openly dedicated to establishing a global caliphate, and eventually eliminating western civilization.

How has this contradictory attitude towards two Jihadi groups come about?

Clearly, much of the credit must go to the BBC. A picture is worth a thousand words. The BBC floods our screens with pictures of hospitals, morgues and rubble in Gaza, the likes of which we’ve never seen with any other wars.  The romanticised portrayal of Palestinian Muslims, its obsessive interest in Gaza, its insidious whitewashing of the racist antisemitic incitement, which runs through Palestinian society and passed from generation to generation.
Alongside that, the  BBC’s non-stop demonisation of Israel, attributing all kinds of malevolence to its citizens and portraying Israeli Jews as more ‘other‘ than Palestinian Arabs. What else could one expect?

Suddenly we’re acknowledging the deadliness of an aggressive, dumbfoundingly objectionable Islamist Jihadi group. We’re being made aware that not only does it further destabilize the whole of the Middle East, but the threat of terrorism close to home now looks inevitable, and we don’t like it.

We’re stuck with ‘returning Jihadis’ and alienated Muslim communities in many of our cities,  which represents a potential enemy within, so the government and the BBC are left with no alternative but to pretend that Islamic State is nothing to do with ‘true’ Islam, which is peaceful and virtuous, for community cohesion. Desperation triumphing over undeniability. On the other hand, for the same reason we are to think that Hamas is inherently peaceful and virtuous, but for the provocation of the intolerable presence of nearby Jews.

I don’t know if this will work, many people aren’t swallowing it. Even the Labour party’s emotional, premature support of Palestinian statehood isn’t running smoothly.

BBC Watch unpacks Connolly’s report line by line, much of which relays, verbatim, Mustafa Barghouti’s decidedly hysterical ‘charge sheet’ against Israel”  which Hadar deftly puts into perspective or deflects by simply asserting one or two facts.

Kevin Connolly’s report was bad, but this time I was particularly struck by the way the BBC’s entire attitude was embodied in John Humphrys's succinct little introduction.