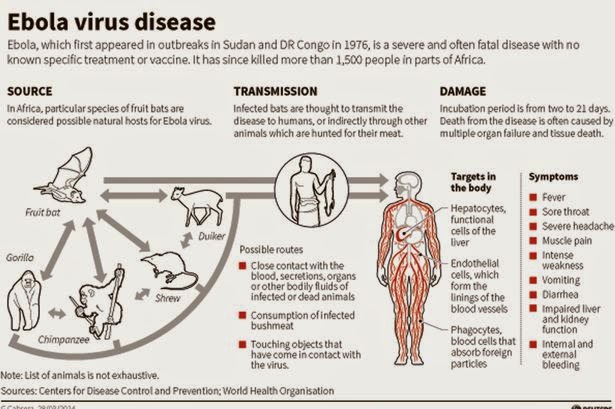 Listening to this morning's Today, I was struck by the programme's Ebola coverage.

Today has been covering Ebola extensively over recent weeks but - despite all the worrying reports - has evidently been very much at the forefront of pushing the idea (government-sponsored?) that we in the UK (and those of you in the US) have very little to fear from the disease - i.e. promoting a 'Don't panic!' campaign - and urging that the focus be shifted back onto West Africa instead.

This may be an entirely reasonable, responsible and correct policy for the the BBC to pursue, but it probably needs pointing out as it clearly shows a conscious agenda on the BBC's part in action.

At 7.09 this morning, John Humphrys and the BBC's Aleem Maqbool discussed the latest actions taken in the United States.

John Humphrys described the U.S. authorities as "nervous...very nervous" and began the conversation by saying, "I suggested to him that all of this might be a bit of an over-reaction". Aleem Maqbool agreed and complained that the U.S. media is ignoring Africa. "Is this being led by genuine fear?", John H pursued, or is it politicians stoking things up? Aleem M replied by talking of the "generation of hysteria" by local politicians and the media. He absolved the federal authorities (i.e. the Obama administration) of any guilt here though, saying they were behaving responsibility.

At 8.10 Mishal Husain took over. She interviewed Dr Amash Adalja from the Infectious Disease Society of America, asking her "But are the authorities over-reacting?". Dr Adalja said yes to that, calling the U.S. actions an "over-reaction" and talking of "public hysteria" there. Her other guest, Yvonne Aki Sawyer from the Sierra Leone War Trust for Children. was also invited to comment on the U.S. situation and expressed her regret over the "hysteria" in the U.S.

What arose was a consensus - BBC presenters, reporters and guests all criticising the U.S. authorities and public, all talking of "over-reaction" and "hysteria". Stay Calm and Think about Africa.