Whatever happened to Richard Black?

I've heard very little news in recent days, but I did manage to hear a few minutes of Today on Wednesday and Thursday mornings.

They were building towards an interview with former environment secretary Owen Paterson (which I didn't hear), based on a speech he'd just given/was about to give (I can't remember which), calling for a wholesale government re-think on global warming whilst bashing 'the Green Blob' (Greenpeace et al) for causing more harm than good.

A brief foray onto Twitter shows that one BBC reporter's coverage of Mr Paterson's speech has won plaudits from some quarters (namely, 'the Green Blob').

And here's Sam Barrett, campaign director for Avaaz (and former head of media for Oxfam):

Interesting piece by @davidshukmanbbc on Paterson / climate. Not sure what the news was but made him look daft @carbonbrief @dpcarrington
— Sam Barratt (@samdbarratt) October 15, 2014

Hmm, approval from two green campaigners for a BBC reporter gently mocking Mr Paterson and making the sceptical former minister look daft? Are those the sort of things an impartial BBC reporter should be doing?

Judge the report for yourselves here.

Another reply to David Skukman on Twitter - demonstrating the same 'gentling mocking spirit' - comes from the director of the Energy and Climate Intelligence Unit (ECIU):

This Richard Black is the very same Richard Black who used to be  the BBC's environment correspondent. People at 'climate sceptic' blogs (like Watts Up With That, Bishop Hill and Biased BBC) would regularly accuse him of acting like a green activist during his time as the BBC's environment correspondent. Eventually, he left the BBC and became an official member of the 'Green Blob'.

This Richard Black is also cited (being critical of Owen Paterson) in the BBC News website's main report on the speech.

Maybe when David Shukman decides its time to seek pastures new (presumably pastures full of wind turbines), Richard Black might be able to wangle him a job at the ECIU, "a non-profit organisation that supports informed debate on energy and climate change issues in the UK", albeit a gently mocking kind of informed debate, probably. 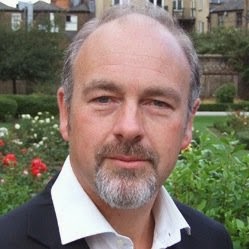