War of the words

What did you think of the video Craig posted the other day, Educating Rona (Rona being the new chair of the BBC Trust, Rona Fairhead.)  I expect she can look forward to one or two variations on that name.

The most frequent complaint from those exBBC staff and critics is that the BBC has an inherently “liberal” mindset, an accusation that implies that the BBC is guilty of something objectionable. As offensive as institutional racism, maybe? The first thing that struck me was how ‘our side’ has turned the word ‘liberal’ into a pejorative.
(How would it be if the BBC had an inherently illiberal  bias?)

Before I discuss the way that particular word has been snatched from its context and used as a weapon, I’ll just remind myself of some other words that have been stolen and used as instant pejoratives. Words like Zionist, and rrrright-wing.

We do the same thing with ‘lefty’. Then there’s that other list of genuinely pejorative words, like genocide, massacre, Islamophobia and racist, which have been misappropriated and used maliciously, for pure mischief-making.
Oh yes, and there’s the opposite, where words like ‘democratic’ and ‘rights’ sometimes serve as a one-size-fits all defence of the despicable, as in ‘democratically elected’ and of course ‘my/your/ human rights’.

So let’s go back to ‘liberal’ with a small ‘l’, as in mindset. Don’t let’s forget that after the post-war period liberalism was a positive; a force for good in austerity Britain.

Britain undoubtedly adopted reforming, liberal or libertarian ideals in the 60s, railing against the ‘thou shalt not’ tyranny that had such a negative impact on people’s lives. I’m thinking of the days when homosexuality was a crime, when illegitimacy was shameful and had appalling consequences  - come to think of it nearly everything ‘natural’ involved some sort of stigma. Corporal punishment was the norm in schools, and it was sometimes extremely brutal. Terrible things went on in the name of religion in those days too.

However, a ‘liberal’ society is not necessarily an ‘indiscriminately permissive’ unstructured, anarchic ‘free-for-all’, with no moral boundaries.  It’s up to society to use liberalism intelligently, and if it goes off the rails, it’s society’s duty to adjust it without turning the clock back and regressing, knee-jerk fashion, into pre-enlightenment times. Sleepwalking into, I don’t know  -  whatever.

Sadly we threw the Judeo/Christian baby out with the reactionary bathwater. We seem to be hide-bound in a culture that has become indiscriminately permissive, tolerant of the intolerant and the intolerable. When I say ‘we’ I think I primarily mean the BBC. I can’t pinpoint the exact time the scales tipped over from the sublime to the ridiculous, but we’ve ended up with a BBC that considers it morally wrong to make any kind of value judgement.

Avoiding the ‘value judgement’ has been adopted as official BBC policy; it set off as ‘good intentions’ which inevitably paved the road to a cuckoo-land destination, where false moral equivalences were the only option.

The BBC is supposed to be objective, but news reporting is frequently corrupted with spin, omissions and superficiality. Contrived outrage dominates the headlines. Documentaries are dumbed down; programmes like Question Time and Sunday Live inhabit a parallel universe, and as many online commenters have observed a weird self-hatred runs through much of the MSM,.

This morning we heard a peculiar discussion between John Humphrys  and two gents, whose names I’m now able to look up on the newly reinstated Today programme running order, (at one stage someone must have thought it was a good idea to remove it)  Musa Okwong, poet and broadcaster and Diran Adebyo, novelist and cultural critic. They were debating whether Mike Reed’s ‘UKIP calypso’ was ‘racist’.
I don’t know where to start. Isn’t Calypso always sung in a Jamaican accent? Isn’t it part of the Calypso genre?  Singing in an accent associated with a particular race might be racist if it’s done in a malicious, mocking way I suppose.
The definition of racist is: “a person who believes that a particular race is superior to another”
By that definition, how is singing a calypso racist? Of course what they really wanted to say was that UKIP is racist. The jury is still out on that, but Nigel Farage insists it isn’t racist, and these accusations seem to be predicated on the principle that anything at all nationalist must be racist, and anything that even defines a race in terms of ethnicity is taboo.
Ethnicity:

“shared cultural practices, perspectives, and distinctions that set apart one group of people from another. That is, ethnicity is a shared cultural heritage. The most common characteristics distinguishing various ethnic groups are ancestry, a sense of history, language, religion, and forms of dress.”

Oooh! Watch out! Mustn’t sing calypso in a Jamaican accent. Someone might assume you feel ethnically superior.

Anyway, back to another point I was about to make before I was so rudely interrupted with thoughts about Mike Reed.
I was about to mention a topic tackled by BBC Watch on Monday  concerning a portion of the BBC’s response to a complaint, which I think illustrated how badly the BBC has been led astray by its own inability to see the wood for the trees.

“we feel it is worth noting that Hamas has both a political wing and a military wing and while its charter calls for Israel’s ‘nullification’ it is at the same time the democratically elected government in Gaza. Hamas’s strategy is certainly to end the occupation through armed resistance while its 1988 charter also calls for Israel’s destruction. It has, however, modified its position over time. Hamas also enjoys considerable popular support among Palestinians, particularly in the Gaza Strip where it is particularly strong.”
It is worth noting this is as much to do with its humanitarian wing, which provides schooling, health clinics and financial assistance, as its military wing which carries out attacks on Israelis.”

BBC Watch has analysed this statement, bit by bit, together with some clips from MEMRI clearly showing that Hamas has not altered their position one iota over time. It particularly concerns me that the BBC uses certain terms as shorthand for those ‘know what I mean’ assumptions. Terms which don’t stand up if you give them a small poke. The emphasised passages highlight the BBC’s copious use of buzz-words that save them doing any critical self examination.
Take ‘democratically elected’. How democratic was that election? How valid is it now? These questions don’t bear close examination, so the BBC is wrong to use ‘democratically elected’ to excuse Hamas’s terrorism.
Take ‘occupation.’ What occupation? Hamas rules Gaza, which is not under occupation - at least not by Israel. In any case, would a strategy of armed resistance ever be likely to end an occupation?
Would the end of the ‘occupation’ also bring about the end of the armed resistance? Answers on a postcard.
So, Hamas has not ‘modified’ its position, nor has it moderated it, if that’s what the BBC was implying. The only modification is on the part of the PA, which has hardened its position, by moving itself politically closer to Hamas.
They’re saying that Hamas has a humanitarian wing, which is a grossly misleading thing to say. If they’re defending Hamas on the tenuous grounds that  it’s a democratically elected government, what else should it do but provide schooling, health clinics and....financial assistance?  However, it’s absolutely not humanitarian. The schooling it does provide is severely political and religious, and its agenda is perpetuation of the hatred of Israel. Health clinics? Funding is mostly expropriated and diverted to .... financial assistance -  for its ‘military wing’.
Then, finally we get to the nitty gritty:

“Our coverage follows the BBC editorial guidelines which state: “Terrorism is a difficult and emotive subject with significant political overtones and care is required in the use of language that carries value judgements. We try to avoid the use of the term “terrorist” without attribution. When we do use the term we should strive to do so with consistency in the stories we report across all our services and in a way that does not undermine our reputation for objectivity and accuracy.”
Our coverage strives to describe the nuanced nature of the organisation in an accurate and impartial manner, allowing our audience to make up their own minds.”

How can the audience make up their own minds when the nuanced nature of the BBC’s Hamas-friendly, disingenuous use of words made meaningless through over-use and mis-use give such a dishonest and unrealistic picture? The unwitting audience is bound to sympathise with Hamas as they mutter “one man’s terrorist is another man’s freedom fighter” and wrap their keffiyehs round their necks in solidarity with the poor Palestinians.

“We don’t agree with your suggestion of bias and this goes some way in addressing your concerns.”

'We' don’t agree? Why would they agree? Who expected them to agree? Sorry, but this certainly goes no way at all to addressing any concerns.
What would Rona Fair head make of that? Would she agree with me, that the BBC has an inherently left-wing, illiberal bias? Or would she agree with the BBC, that Hamas has modified its position over time, that it’s not a terrorist organisation even though this country has designated it as such, and that the fact that Hamas appears to have considerable popular support among Palestinians, particularly in the Gaza Strip, must mean that it is a humanitarian, democratically elected government merely pursuing legitimate armed resistance?
If so, how does that square with the BBC’s position over UKIP,  which the BBC appears to consider racist, despite the fact that it evidently has considerable popular support among the British public.

All together now, in your best Jameeyacan:
"When we take charge / And the new prime minister is Farage / We can trade with the world again / When Nigel is at number 10." 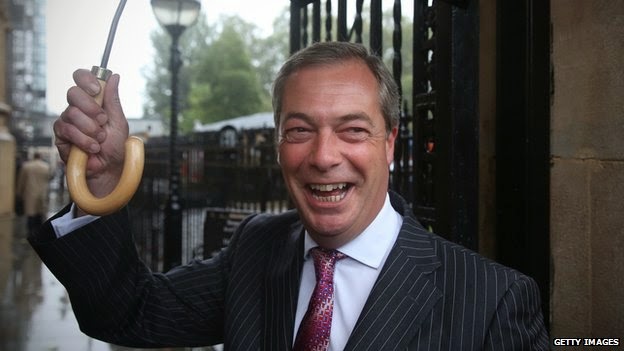