A couple of says ago I read this in the Times. It’s behind a pay-wall, so I thought I’d bring it to you for fun. 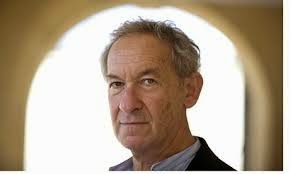 “Simon Schama has revealed that despite attempting to accentuate the positive in telling the story of the Jewish people, the continual rearing of anti-semitism keeps forcing him back to the “death star of the Holocaust”.Schama said that the “gathering drum roll of antisemitism” after the recent Gaza conflict had forced him to reassess his conclusions about the journey of the Jewish people.
The historian, who is late finishing the second volume of ‘The story of the Jews’ said that he previously “ran away from writing about Jewish history because it was so unsettling.”
He said that he had begun the second volume starting with the Spanish Inquisition, with the “ blithe assumption” that he could “put the balance back” because there was “plenty to rejoice and celebrate.”“I wanted to say that there was so much about Jewish history worthy of celebration. That was my hope, to look at the Jewish subject in a qualitatively different way,” he told the Cheltenham Literature Festival.“But then what happened was the gathering hideous drum roll of antisemitism, particularly in Europe.”He cited protests against Israel’s actions in Gaza with chants of “gas to the Jews and caricatures of Benjamin Netanyahu, the prime minister resurrecting the “blood libel”.
“There has been a toxic antisemitism where criticism of Israel, which is legitimate - I do it myself - has leaked out and morphed into a much more dangerous, vitriolic and loathsome attack on Jews across the world for just being Jews.“We have seen it here. The Sainsbury’s fiasco in removing all kosher food, the collective ban on anything that receives subsidies from the Israeli government.”
He said it had made him think again about the “parameters of the book.”

I’m not certain what Simon Schama is saying here. Is he saying that he’s afraid to criticise Israel, or report any Jewish-related issues negatively because it will ‘give succour’ to Israel’s enemies, and he’s wondering where that will end?  Or what?
If he is, then that hypothesis contains its own suitcase-full of negative baggage, which could be used as evidence and held against the Jews, if used later in a future Kafkaesque court of ‘the Jews versus the world’.

If he’s merely saying he’s afraid of making himself unpopular by writing nice things about Jews, then that’s  quite bad too. I really don’t know what to make of it, but then it’s only a newspaper report and we know how accurate they are.

Would the public’s black and white attitude towards Israel/Palestine and its white and black attitude to Islamic State (so-called) and its ilk still be the same if, say, hordes of reporters flooded in to other Islamist conflicts to film the dead and injured as they always invariably do on behalf of the Palestinians? That is if they didn’t have to risk losing their lives in the process.
Posted by sue at 11:16