My old spiel about the sort of features you'd usually get on a typical edition of Radio 4's Sunday...

"the usual diet of breaking news from the Arab world, Christian-related abuse stories, bad news about the Catholic Church, something about human rights, the usual airing of Muslim grievances, a call for something or other by a left-wing campaign group, an Anglican row over something, that sort of thing"

...sprang to mind again during this morning's edition of the programme. Four out of the six features today were picked from that standard menu.

Still, there were other, less usual features too - choices from the specials board, so to speak.

Here's how it went (using quotes from the Sunday website as titles for each section):

1. A more balanced approach to economics which takes its inspiration from the Catholic Church is being urged in a new report commissioned by the think tank Theos. We speak to its author.

That author was Edward Stourton's old friend from the Tablet, Thought for the Day's  Clifford Longley. His report argues that "market fundamentalism" got us into trouble in 2008, so what's needed in an infusion of Catholic social teaching. Clifford is specifically pioneering the concept of 'just money' - a parallel to 'just war' theory. The idea is that making profits isn't necessarily a bad thing; it should, however, "serve the common good". Business is fine, therefore, but any profits need to be made under certain social constraints. Labour's policy chief John Cruddas is, apparently, very enthusiastic about the report.

We hear a lot about Catholic social teaching on Sunday.

2. The Chinese American Christian pastor Bob Fu speaks to Edward about the growth of Christianity in China despite ongoing persecution, and assesses the implications of the recent Hong Kong protests for the mainland.

Described somewhere as "probably the world's best known Chinese Christian", Bob Fu now lives in exile in Texas. He was a demonstrator in Tiananmen Square in 1989 and one of those who the Communist Party took revenge on afterwards. He converted to Christianity during his subsequent interrogation. He'd heard others lying to get themselves off the hook and was having very dark thoughts about carrying out a suicide bombing against the Chinese regime when he began reading Chinese pastors' testimony and a missionary book. After becoming a Christian he was imprisoned again (in 1996) for establishing an underground house church i.e. "illegal evangelising". He then went to Hong Kong before getting his family out and moving to America. (He thanks people in the free world for helping them).

His new uses a quotation from Madame Mao crowing that Christianity was "dead and buried" in China. Well, it's not dead and buried now. It's said there are more Chinese Christians than Communist Party members in China now - "the most rapid growth since the time of Adam", Bob called it. Over 300 churches have been attacked in recent months and there's been over sixty years of persecution now. For Bob Fu this shows, "the most persecution there is the more Christian believers there will be".

An interesting and inspiring man, and all credit to Sunday for interviewing him.

3. In the second of three special reports on what ordinary Catholics think about their Church's teaching on family life, Kevin Bocquet speaks to school children and university students.

Back to Catholic matters, and a two-part report.

The first part came from a Catholic retreat centre in Bollington, Cheshire. Six 14-years old Catholics expressed their very clear views. None of them goes to church very often, and they feel frowned-at for not going every week. On marriage and the family,  they think the church should get with the 21st Century, be more "lenient" and let people divorce and remarry. On contraception, they say "people should be allowed to do whatever they feel is right" and believe that the Church's rules "shouldn't be as strict as they are". God gave us free will, they said. It's not for Church to "tell people how to live their lives". Despite all this, they all feel Catholic and believe they will be Catholics until they die.

The second part of the report came from Manchester (where most Sunday reports seem to come from these days, given that the programme is broadcast from Salford), specifically from a Royal Catholic Student Chaplaincy there. This group of young adults was far more theologically-minded and expressed a much greater spread of views from fairly liberal to fairly conservative. None, strikingly, was as emphatically socially liberal as the children in Cheshire.

I suspect that the selection of views reflected each place and each group accurately.

4. The Church Times has released its 'top 10 Christian books'. We pick through the list and discuss how theological writing can appeal to the modern reader.

So, St Augustine's Confessions is the best Christian book of all time, according to the Church Times; and, for those interested in such things, here's the full list:


1 Confessions by Saint Augustine
2 The Rule of Benedict by Saint Benedict
3 Summa Theologica by Saint Thomas Aquinas
4 Revelations of Divine Love by Julian of Norwich
5 The Divine Comedy (Inferno, Purgatorio, Paradiso) by Dante Alighieri
6 Pensees by Blaise Pascal
7 The Pilgrim's Progress by John Bunyan
8 City of God by Saint Augustine
9 The Imitation of Christ by Thomas a. Kempis
10 Complete English Poems by George Herbert


As Edward Stourton noted, the most modern book on that list is The Pilgrims Progress.

Sunday talked to Martyn Percy (who compiled the list) and Chine Mbubaegbu from the Evangelical Alliance. Martyn was unashamed to have gone for reliable, rich, influential classics. Despite some gentle ribbing from Ed Stourton, he stuck to his belief that these books - some of which haven't sold a single copy over the past year - matter. Chine was less smitten, noting that many of her friends' favourite writers - Billy Graham & Co - aren't there. The importance of C.S. Lewis as a popular classic Christian writer was agreed upon by all and both of Ed's guests agreed that there are no such obvious classics around today, though Cambridge University's Sarah Coakley got an honourable mention.

Any list that has George Herbert's poems in its Top 10 is fine by me but it's a shame that C.S. Lewis's Screwtape Letters didn't make the grade though. 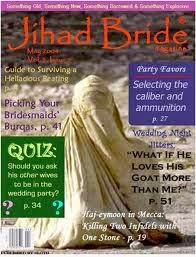 5. Social media, glossy videos and easy access Jihad magazines are all part the recruitment drive for extremist groups like the Islamic State. How are young people drawn in? And what is the best way to counter these messages? Bob Walker reports.

Bob Walker's report began and ended with Khadijah Kamara, the mother of the 19 year old jihadi killed in Syria whilst 'serving' with the al-Qaeda affiliates out there. She was on Broadcasting House last Sunday and, from reading Biased BBC, seems to have appeared on at least a couple of other programmes across the BBC as well. Whatever her personal merits and circumstances, she is certainly getting a good deal more attention from the BBC that the mothers of the victims of jihadis.

Bob noted that Kadija still blames the authorities for her son managing to fly to Syria. She herself believes peer pressure - especially the internet - caused his radicalisation.

We also heard from Jahan Mahmood, a former Home Office advisor. He was looking at an al-Qaeda recruitment video, which he described as a slick Western style army recruitment video complete with Muslim songs. He argued that the authorities have taken too long to take such online material seriously, saying they should have started in 2008-09. He wants a strong online counter-narrative and those videos deconstructed (perhaps using former fighters.) He also blames "shoot-em-up video games" that sanitise war. He himself tries to de-glamourise war, such as by showing the horrific effects on an enfield rifle.

A Home Office statement was then read out saying that the government is doing lots of good stuff and that 50,000 pieces glorifying terrorism have been taken down.

Next came the obligatory aggrieved Muslim - a cleared terrorist suspect, arrested for looking at an online manual used by terrorists. He says (and the courts believed him) that he was merely researching how to make prank smoke bombs. Bob Walker, rather gratuitously,  dropped in that he's now a "carer for his disabled father" and also a political activist.

Next it was the turn of Hafiz Usman from Birmingham Central Mosque. He said that imams are doing lots of good stuff and tackling extremism online.

Finally it was back to the mother of the dead jihadi, who never knew about such material until her son went to Syria. Bob Walker said that such material "twists religion to justify violence" [the standard BBC/British government view] "but it's also religion [in her case, Islam] that gives her comfort", and the report ended with  Khadijah Kamara explaining the importance of her faith.

6. This week the conservative evangelical group 'Reform' pulled out of the Church of England's 'shared conversations' on sexuality. Edward Stourton asks whether the deep divisions on this issue can ever be resolved.

Now, this really was a classic 'Anglican row' story. It pitted Bishop Alan Wilson, the go-ahead Bishop of Buckingham (strongly pro-gay marriage and that sort of thing) and Susie Leafe of 'Reform' (strongly against gay marriage and that sort of thing). It was a decidedly sour discussion, with Bishop Alan denying that he thinks conservative evangelicals like Susie are 'homophobic', while Susie says that she's read his book and that's exactly what he calls people like her.

She didn't want a debate that she thinks we overturn correct Church teaching. He cited Romans 14. And so on.