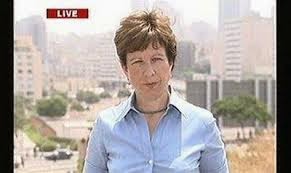 There was an interesting interview on this week's Newswatch with the BBC's Chief International Correspondent Lyse Doucet - so interesting that I'll transcribe it for you.

She discussed the dangers faced by journalists in the light of the self-proclaimed Islamic State (S-PIS?). I'd never thought of them having 'sleeper cells' before. Though Israel and Gaza may be almost entirely safe for BBC reporters, places like Syria or Iraq (or Yemen or Pakistan, etc, etc) are far from safe, and getting ever less safe. I would not want to be a BBC reporter in such places for anything in the world and, though we carp at them, it's good to remember the danger they are in from time to time.

She then discussed why international news is no longer foreign news and, unfortunately, she's right about that. The world's wickedness increasingly encroaches upon us, and we (or certain parts of 'we') return the favour (by sending jihadis to tyrannise parts of Syria and Iraq for example).

She also responded to BBC audiences' apparent sense of despair at all the depressing international news going on at the moment and made I point I hoped someone would make - that people wanting to turn it off and switch to Radio 2 is a sign that they are responding like human beings. It's the people who watch beheading videos so as to be 'up on the news' that worry me.

She then discussed the different ways BBC journalists could try to engage their reluctant audiences with stories from war-zones. As I wrote the other day, this suggestion from Today's Jamie Angus is something that BBC journalists are already doing, and that Radio 4's FOOC has been doing for years. Lyse is convinced such stories work. I'm not so sure. The grim sting in the tale of such reports will probably still produce the same depressed response in the viewer or listener as an unremittingly grim report.

As for Jon Snow's emotional, impartiality-busting video about Gaza, I think she chose her words very carefully - so carefully in fact that I've still no idea whether she thinks he was right or wrong to have done it. It's a very 'impartial' answer!

She thinks the line between showing compassion and emoting is a pretty clear one. I'm not so sure about that. Some of the recent reporting - and tweeting - from Gaza seemed like emoting to me.

Lyse Doucet is an interesting figure. She responds constructively to criticism from viewers and even from blogs like BBC Watch, unlike some of her colleagues (Jon Donnison, for example mentioning no names).


Samira Ahmed: You've just come back from Iraq, I think, and you have reported over the years from the most dangerous frontlines in the Middle East. Is the safety aspect of this different in any way? And, indeed, is the whole reporting different because of ISIS?

Lyse Doucet: It is undeniable that the risks now involved in reporting of any kind are far more acute. Journalists are profoundly aware of them, and most profoundly aware of them in places where this group...call it IS, Islamic State, ISIS, ISIL...who have not just made journalists a target but have brought them cruelly into the war, because people who are watching will have seen either the news about the beheadings...Some may even have looked at them. We would say don't look at them because they're just far too gruesome to behold and they don't want to give oxygen to those who want to perpetuate this kind of imagery.

So, yes, first of all it's a risk to the journalists, to the lives of journalists, but it's a risk to the reporting as well because now, for example, some of our brave correspondents - like Paul Wood and Ian Pannell who are going into the north of Syria - have to think very long, hard and carefully and prepare very carefully because in those areas where Islamic State is operating or where they have sleeper cells the journalists are at risk because they are seen as ransom material, as a way to earn money and a way to get attention.

Samira Ahmed: The scale of atrocities, beyond the hostage murders, you know, the targeting of minority groups who are left in the desert...They make headlines and they have been making headlines for months, and the scale of it took viewers that we're hearing from suggest that it can become kind of numbing, and I wonder how you view that challenge?

Lyse Doucet: It is numbing, but we can't look away because they're not foreign stories far away. They are stories which affect us directly in our own lives. We say now that international news is no longer foreign, because the Ebola crisis is coming back to Britain, jihadis are going from here. These are stories that are about us as well, about our own societies. They are not about societies that seem so far and distant from us both in every which way.

Samira Ahmed: People can still feel helpless when they watch them, so I want to ask you what you make of Jamie Angus's comments...he edits the Today programme...and he actually said, you know, "I think people say I can't take this any more. I can't deal with this information. What am I supposed to do about this terrible thing I can't influence?" And in frustration, he says, they turn off and go to Radio 2. You know, they just want to get away from this unremitting bleakness.

Lyse Doucet: I think that's completely understandable. Even when I came back from Gaza, then I wanted to see what my colleagues who were still there were reporting, and I hesitated. There was this strap across which said, "Warning: There are distressing images", and I thought, "Do I want to see the distressing images? Does anyone really want to see the distressing images?" And so we can all be forgiven, I think, for having a human reaction. And in some ways that's very encouraging that we're relating to this as human beings. But I think ultimately we have to come back to watching and listening because these stories matter about the world in which we live and, sadly, it is a very troubled world.

But I absolutely believe that there are different ways to tell the story, and it's interesting you mentioned Jamie Angus because we had exchanges last week when I was in Baghdad. And, of course, in Baghdad I had to report on the dangers around Baghdad, about the rise of war against Islamic State, now in Britain joining the air campaign. But I also went to the most popular park in Baghdad, along the Tigris river, and reported on what was, in effect, Crufts in Baghdad, a dog show in Baghdad, and I reported it as you would at Crufts. You know, I talked to the dogs. I described the dogs. I spoke to the owners about the dogs and then asked them, of course, the more serious questions. And we had a lot of positive feedback about that.

Well, there was one time...Every time I go to Syria I say, "What's a new way to tell the story?" So on one trip we went to the most popular ice-cream parlour in the summer. Everyone understands ice-cream in summer. So do people in Damascus. We went to the Damascus Opera House. People will understand that, especially in a city like London, you need to hold on to culture...any city of the world in fact...that you want to hold on to those things that matter to your heart and your soul, even in the middle of distress.

Samira Ahmed: When you talk about the need to report in different ways, you have written recently about an editorial shift in your journalism. I think you talked about the need to be compassionate and not emotional. Now, when Jon Snow was in Gaza for Channel 4 News he made a very personal, a very impassioned film about Palestinian suffering. That seems to sit uneasily with the BBC's requirement for impartiality. What's your view on that approach?

Lyse Doucet: I was there at the same time as Jon Snow. I've great admiration for his work, for my colleagues at Channel 4, but, as you know, they have a very different remit from us, and much has been said about the fact that Jon didn't put that out on his own programme on Channel 4. He put it on a video. So it got away from some of the regulations of broadcasting. But he felt very strongly about it and he has a certain position in British society, British broadcasting, and if you're Jon Snow perhaps you're allowed...Certainly he felt he was able to do that.

But I do believe absolutely that we have to show compassion. Otherwise we would...I mean you'd have to have a heart of stone not to be moved by what is happening in the wars of our time. But I don't believe in being emotional because that means you're looking control of your emotions and your capacity to tell the story clearly to people and to tell them what's important about the story, to put it into context. I think there is a difference.
Posted by Craig at 10:18