The Shard of Babel


And now for something completely different...

I would never really have expected myself to warm to a series of short BBC talks by an Observer columnist with a taste for the French structural/post-structuralist/quasi-Marxist Roland Barthes [and fancy the BBC commissioning that!...er?!?], yet warm to them I most certainly have.

In fact, I'm even hotter for them than one of Nando's extra extra hot peri-peri marinades - the subject of Peter Conrad's third piece in his BBC Radio 4 series, which started last Monday.

Were I an ancient Greek god (which Sue tells me I'm not), I'd have Mr Conrad's glorious 21st Century Mythologies on every day of the week for eternity, not just for three weeks.

(...meaning the editor of You and Yours, who's had a good ten minutes scythed off his or her programme. I can't be bothered to check if it is a 'his' or a 'her' by the way. If it is a 'her', of course, that would make her the goddess of dullness. No offence).

[Dear Lord, I'm even starting to write like Peter Conrad now (ed - Yeah, in your dreams!) - except for the bit in parentheses.]

Trying to work out which episode was my favourite from this first week's run was hard. Peter Conrad dealt with screw-top wine bottles, Oscar Pistorius and Apple (as well as Nando's), and I learned a lot from all of them, finding my imagination going into overdrive for several minutes afterwards - but the one on the Shard must be awarded the laurels. 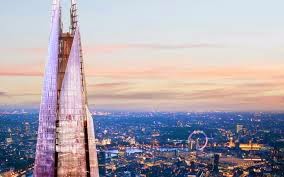 I re-listened to it (with great pleasure) in the hope of extracting the best passage but there was nothing but 'best passages'. So, here's one 'bleeding chunk' (as we Wagnerians say) chosen at random:

Ticket buyers to the view from the Shard are assured that this is the only place to see the whole of London in high-definition. The sales pitch is exactly calculated to appeal to our electronic tastes, but it's misleading.

Although the vantage point is high, the view lacks the razor-edged clarity and microscopic detail of a HD image on television.

Below the city blurs indiscriminately, its eminences equalised by their prostration.

The axis of the old skyline extended down the river from the Houses of Parliament, with their Gothic crockets, to the grandiose Baroque dome of St. Paul's, linking church and state but keeping them at a comfortable distance.

Seen from above that diagrammatic groundplan of authority is smudged by haze, jumble, chaos. The gilded torch of The Monument, raised on its column as a memento of the Great Fire, appears to be grounded. From this angle Buckingham Palace is a stage set with nothing behind it but gravel and grass.

Because height is the Shard's prerogative no other attempt at verticality counts. What matters is elongation. Trains on the elevated tracks are like tapeworms and the roof of Nicholas Grimshaw's platform roof at Waterloo, once occupied by Eurostar, is a traffic jam of armadillos.

The only element of continuity, outlasting and overwhelming everything else, is the tea-coloured river.