I was rather taken aback by Mishal Husain on this morning's Today.

Given that another British hostage has been murdered by Islamic State, and that the first British hostage was murdered before Britain decided to join in the airstrikes on IS, it was surprising to hear her so strongly pushing the jihadists' own line of reasoning in both her interview with Frank Gardner (7.10) and John Simpson (8.10)

- Is there a reference in the video to British involvement in the airstrikes?

- There is a reference, John, in this latest video to airstrikes, to British involvement. Do you think they'll be an impact on the way that this coalition now operates.

- And yet by being involved it is fuel to the jihadis' propaganda, isn't it, in the sense that the West wants to bomb this part of the world, wants to target civilians in their narrative?

Perhaps less surprising was the other angle she pursued - a theme we're seeing a lot of today:

- You were talking about the Muslims who'd called for Alan Henning's release and, of course, there's been condemnation of the extreme actions of this group from Muslims as well as others. And the group released this video on the eve of a festival, Eid, that Muslims around the world will be marking?

I was even more taken aback, however, by the guest they invited on at 8.30 - Majid Freeman. 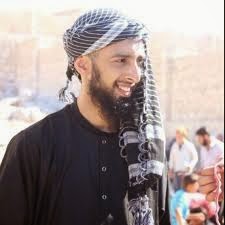 According to the Gatestone Institute, referring to a previous BBC programme:

Other convoy participants are even more explicit in their support for terror. Majid Freeman, who in the BBC film is introduced as just "Majid," has encouraged European Muslims to "do jihad in Syria," and has promoted "tributes" to the late Al Qaeda terrorist Anwar Al-Awlaki on his Twitter and Facebook accounts.

Freeman has also posted tributes to the Al Qaeda operative Aafia Siddiqui: "Not a day goes by when we don't think of a our sister Aafia Siddqui. … Allah, unite the Ummah and remove the backstabbers … and use us as a means to help the oppressed."

John Humphys merely introduced him as "an aid worker from Leicester".

Later John H, asked him about the appeals from British Muslims on Mr Henning's behalf. Mr Freeman praised British Muslims, imams and CAGE in response and blamed the British government for "abandoning" Mr Henning, saying that IS had kept him alive for much longer than the other condemned hostages and that they'd even allowed him to send a message to his family, so they were willing to release him...if only the British government had acted. He then condemned Britain's involvement in airstrikes.

Thankfully, Lord Dannatt was on hand to describe such a view as "harsh" and defend the government - though he wants us to join the US in also striking Syria.
Posted by Craig at 18:00