Boko Haram, the Extraordinary Synod on the family, Ebola, the morality of tax, end of life care, and ShabbatUK

Today's Sunday on Radio 4 began with the news of the apparent ceasefire between the Nigerian government and the bloodthirsty Islamists of Boko Haram, and the possible release in the coming days of the abducted school girls.

I have to say I wasn't expecting either development, given all that's gone before. We could do with some good news though, so fingers crossed!

Then it was onto Catholic matters, specifically the Extraordinary Synod on the family at the Vatican. The bishops there had rejected some of the 'gay-friendly' statements in the full draft document, plus some relating to remarried Catholics.

Edward's liberal Catholic bias has a habit of coming through in interviews with Cardinal Nichols and, for the first time under Pope Francis, I got a strong sense of dissatisfaction from Edward at the less-than-revolutionary turn of events in Rome. This was not a friendly interview in its early stages - and Ed came close to sounding cross at times.

Here's a flavour of his line of questioning:

And on the specific point of gay people, the Church, presumably, this morning is in the curious position of having indicated earlier in the week that it wanted to welcome them into the Church, and now saying, no, actually we don't after all?

Well, it tells us a bit more than that, doesn't it? It tells us the mind of the Church is not to as welcoming and liberal as it appeared to be earlier in the week?

It was thanks to Cardinal Nichols that a further piece of evidence for bias on Edward Stourton's part emerged (or possibly confirmation bias on Edward Stourton's part). Twice, including at the start of the programme, Edward quoted Pope Francis criticising the "hostile rigidity" of conservative traditionalists in the Church. Cardinal Nichols, however, pointed out that the Pope also condemned the "destructive good will" of progressives and liberals who wanted change at any cost - people like Ed Stourton's friends at the Tablet.

If you check out the news reports, you do indeed find that even-handedness in the Pope's statements. Why did Edward Stourton cherry-pick just the statement condemning Catholic traditionalists?

Things then took a weird turn as it emerged that Cardinal Nichols voted against the 'gay' statements because they weren't "welcoming and progressive" enough (Ed's words) - or at least he thinks he voted against them because, he said, he can't remember if he did or he didn't. [At that point I could well understand why Edward Stourton sounded incredulous.]

Edward's mood suddenly changed though as it seemed to dawn him that Vincent Nichols was actually on his side in wanting "more positive" attitudes towards gay people. His tone audibly softened in the following questions - which, I think, further suggests his bias.

Edward's mood of dejection then appeared to return at the turn of events as he worried about how the Church's new spirit of 'democracy' had produced such an unexpected result.

Cardinal Nichols then gave him a little pep talk on impartiality that made me smile:

Vincent Nichols: I would a similar level of honest, open, pensive and very, very charitable exchange of views in order to discern a way forward. What Pope Francis does with immense depth and skill is to create and follow a process. And he comes at it all of the time with an eye for discernment. Where are we being prompted to go. And that excludes nobody. So nobody's views are unimportant. Nobody's views are there to be dismissed. They're to be listened to, and we sense our way forward.

Ed Stourton: Including the views of traditionalists, which clearly made themselves felt very powerfully in the conversations during the last few days?

Vincent Nichols: Well, why not? They are people - if you can use that category. The Pope did - who have a profound dedication to the Church, who give their life to the Church and see in their understanding of the coherence of the faith continuity with the tradition to be very, very important. That's a very proper part of being a Catholic.

If only Sunday would really take the Cardinal's advice to heart!

The next topic was Ebola. Edward mentioned an article in the Tablet [which has started getting more mentions again on Sunday in recent weeks] by Monsignor Robert Vitillo of the Catholic charity Caritas Internationalis, who has recently returned from Liberia. Msgr Vitillo compares Ebola with the early days of HIV. He's worried that the same kind of "fear, discrimination and stigmatisation" is re-appearing. He talked about the actions being taken by Caritas (and Cafod) and the Catholic Church in the effected countries. 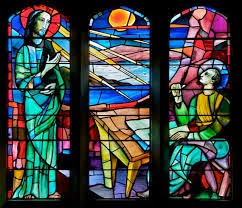 Sunday is always keen to promote calls from campaigners for something 'left wing' or 'progressive', especially if it's something from a religious group, so it was hardly surprising that this week's edition promoted the calls from Christian Aid for businesses to pay more tax than the law requires. Cue a discussion on the morality of tax.

Sunday began by doing what Salford-based Sunday now tend to do - canvas a few 'vox pops' in the ultra-safe Labour stronghold of Manchester. Why do they keep thinking that's going to give a representative snapshot of public opinion? Won't that tend to massively skew any survey they do?

The results of this survey? One man said corporate tax avoidance is immoral and that the rich make use of loopholes. One woman said you should be paying tax to the right level, not paying as little as you have to as tax is "for the betterment of other people". A second woman said the government wastes money and people can make better use of their own money. A second man seemed to be blaming to government for taxing tax from people who haven't got the money. A third woman said, as a pensioner, that she'd pay less if she could do. A fourth woman said paying as little as you can is immoral. (4:2 in favour of Christian Aid's position then).

This was followed by an interview with a co-author of the Christian Aid report, Canon Dr Angus Ritchie. [You will note that no dissenting guest was invited to join him].

Revd Ritchie said that multi-national companies are his report's main focus and made the moral case against their perfectly legal activities. At least Edward challenged him decently.

Benjamin Franklin is usually credited with coining the phrases, "In this world nothing can be said to be certain, except death and taxes", and after taxes came death and a report from Trevor Barnes on end of life care - "how hospitals and hospices are adapting their services to respond to religious and cultural needs of relatives and patients", or more specifically, how ethnic minorities feel they are missing out on getting the full range of services.

Trevor went to a Catholic hospice in an ethnically and religiously diverse area of East London. The hospice caters for people of all religions and none. We heard from Hindu relatives, praising its work. We then heard from a charity campaign manager arguing for better services, before hearing from the imam at a university hospital about the problems faced by people from the South Asian sub-continent, a hospice palliative medical specialist pioneering a new approach called 'Caring Communities' to bring it lay knowledge and a lecturer in palliative care who said that pain can be understood in different ways by different cultures (say, as a divine punishment) so that needs to be taken into consideration.

Next came something a little different for Sunday, a positive item about Judaism.

It took the form of interview with the Chief Rabbi, Ephraim Mirvis, about ShabbatUK which is calling on Jews across the UK, regardless of their level of religious observance, to celebrate "a Shabbat unlike any other" (from 24-25 October). According to the ShabbatUK website,


Shabbat is a central part of what it is to be Jewish. It plays a crucial role in Jewish identity with its powerfully uplifting and transformative qualities.... This is an incredible opportunity to join with fellow Jews around the world...to experience life, for just one day, disconnected from the daily grind and engage with Shabbat in a meaningful way

Rabbi Mirvis told Edward Stourton that it will be fun:


Judaism is fun. The traditional Jewish religious way of life is fun. The happiness that is experienced within the family circle, the joy within the heart of a community by celebrating the Sabbath days is something very precious and I would like as many people as possible to enjoy it.

He then sang traditional Jewish words - the Jewish grace - to the tune of Match of the Day. (Yes, really).

Finally, it was back to Catholic matters and the Extraordinary Synod on the family at the Vatican, and a discussion between Mark Dowd of the Catholic gay group Quest and "radical orthodox" Catholic blogger Paul Priest [a new voice for Sunday] - another opportunity to test out Edward Stourton's impartiality.

Well, he did OK here it must be said. Besides some tutting during Paul Priest's opening salvo [denouncing the attempted hijacking of the synod by Church liberals], he let both of them have their say - unfortunately, not for very long though as the programme ran out of time.

I think Paul himself (On The Side of the Angels) was quite surprised to get an invite onto Sunday. He's not really Ed Stourton's type, is he?


@pattif21 Thanyou Ma'am - think someone must have dropped out at the last minute - how they had my phone no. astounds me!! @BBCR4Sunday
— OnTheSideOfTheAngels (@OTSOTA) October 19, 2014

@OTSOTA I was wondering how you got the gig - normally 'balance' means MD v someone from @Tablet editorial board @BBCR4Sunday
— Patti Fordyce (@pattif21) October 19, 2014