"I agree with Nigel"? 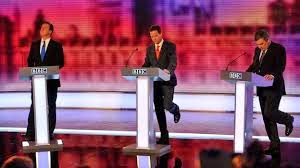 This week's Newswatch dealt with the thorny issue of BBC impartiality and the proposed next general election leaders debates, especially given the fractured UK political landscape at the moment, posing the question:

Why is there a place for Nigel Farage but not for the leaders of the Greens, the SNP or other parties in the proposed television debates for next year's general election?

Samira Ahmed said it was "the contrasting fortunes" between the Lib Dems and UKIP since the last general election that prompted these proposals, noting the latest poll putting UKIP on 25% "whereas the Liberal Democrats' popularity has plummeted".

However, over 150,000 people have signed a petition demanding a place for the Greens and the Greens are threatening legal action against the broadcasters. The SNP and Plaid Cymru aren't happy bunnies either.

Two viewers - one an SNP supporter - were invited to put their points to the BBC's chief political advisor, Ric Bailey.

Christine Dench, one of the viewers, wanted to see the other parties involved to ensure "there's balance across the board, while the SNP supporter, Pauline Taylor, accused the BBC and the rest of the media of having "a strange fascination with UKIP", something she finds "disturbing and undemocratic":

If the Monster Raving Loony Party had had as much publicity as UKIP has had they'd probably have a MP as well at Westminster. Now, would they be elevated to share a platform with the rest of the main political parties? I don't think so.

Samira Ahmed added that Newswatch has been hearing such complaints for some 18 month, "the sense that UKIP has been built up by a lot of BBC exposure".

Christine said that there's a "question of what's leading and what's following here", wonder if the BBC should be leading rather than following public opinion - though, speaking for myself, isn't that precisely the problem many of us (on blogs like this) have with the BBC, that we think it already does attempt to lead public opinion - in the wrong direction - and that it should flipping well stop doing so!!!].

The BBC's Ric Bailey explanation of the decision to exclude the Greens bears quoting:

It's perfectly true that the Greens won a seat at Westminster in 2010 and UKIP didn't. Now, what we have to do is look at that, take that into account, but we also have to look at the change in support since then and take that into account. Even in 2010 UKIP actually got three times as many votes in 2010 as the Greens did, even though the Greens won one seat. At every single election since then UKIP has done much better. So the evidence of electoral support from 2010 until now is overwhelmingly clear that UKIP is much better supported than the Greens and that is part of the judgement we take.

The thought did pop into my head after hearing that that it should surely follow from, shouldn't it, that Nick Clegg should be dropped from one of debates and Nigel Farage given a second spot? After all, it's no less overwhelmingly clear that UKIP is now much better supported than the Lib Dems (25% to around 6-7%).

On the SNP and Plaid, Ric Bailey argued that, these will be debates for the Westminster parliament, and the BBC is proposing debates within the nations of the UK as well as the big national debates.

He didn't draw the obvious conclusion from that - so I'm drawing it myself! - that as these will be nationwide leader debates there's no point in having non-nationwide parties involved. The vast majority of people won't be able to vote for them, so they have no place there. Therefore, the BBC is right to suggest confining the leaders of the SNP and Plaid to BBC (and other media) platforms in Scotland and Wales only. That's why the DUP isn't going to get an invite either.

That line of argument would surely have invalidated Pauline Taylor's comeback that the SNP is the third largest party in the UK (membership-wise), three times bigger than UKIP.

Ric Bailey repeated pointed out how complicated it all is, and how there's no golden model available to satisfy everyone. Indeed, and he can expect lots more brickbats in the coming months.
Posted by Craig at 12:25