Is the BBC biased against the Green Party? 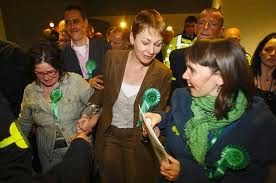 Now that's a startling title on a blog like this to start a quiet Sunday morning, isn't it?!

Curiously enough, even though I'm pretty right-wing (as you may have guessed) and can't abide most of what the Green Party stands for, I'm not unaware of the fact that many Green Party supporters are not at all happy with the BBC these days. Their complaints are all over Twitter, for starters.

Yes, you might very well think that Green Party supporters should be falling over themselves to praise the BBC for its services to matters environmental, especially the corporation's vigorous reporting of 'global warming', and that each and every one of them should be in favour of making the BBC's environment analyst Roger Harrabin their god and king...

Quite a lot of Green Party supporters actually, genuinely, seem to feel very hard done by - especially after brooding about the amount of coverage UKIP gets on the BBC. [No publicity is bad publicity after all].

This week's Newswatch featured the kind of comment I've been seeing on Twitter for months, complaining that UKIP is given far too much attention by the BBC:

So now UKIP have an MP I expect @BBCNews to treat them like @TheGreenParty and never mention them again.

And, in the spirit of 'impartial' blogging, I'll also quote the following slightly-out-of-date chart showing a remarkable fact about UKIP's presence on Question Time (prior to this week's election results): 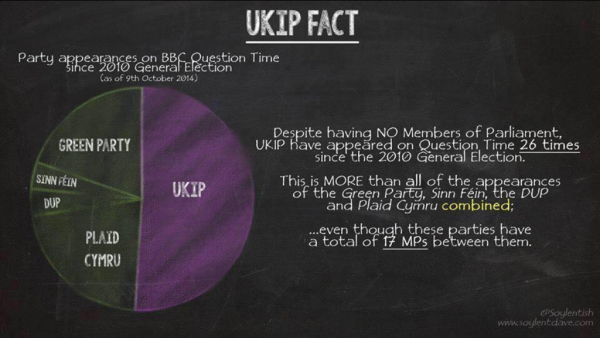 It is true that UKIP has been invited onto Question Time (since 2010) more than those four parties [the Greens, DUP, Sinn Fein and Plaid Cymru] combined - more than twice as often as the Greens. (The figures are easily checkable). UKIP representatives have appeared 26 times, the Greens just 11 times (despite having had an MP since 2010). Indeed, UKIP have even appeared more than the governing party in Scotland, the SNP (with 16 appearances).

That, of course, doesn't say anything about the BBC's motives for inviting UKIP into what has usually proved to be a highly hostile forum for them [as this week's edition of Question Time graphically demonstrated], but it remains a surprising fact and one that infuriates some on the Left.

The same, indeed, is also true - sampling another show whose archive is easily accessible - about the Andrew Marr Show. Since the 2010 general election, UKIP guests have appeared 11 times (all of them Nigel Farage) while Green Party guests have appeared a mere 5 times (Caroline Lucas and Natalie Bennett).

The Green Party supporters' beef with the BBC is that if they had been given the same amount of coverage as UKIP they'd be doing (at least) as well as UKIP - i.e. they'd also be flying high now.

Well, I very much doubt they'd ever be flying that high but they might very well be correct that a similar amount of exposure on the BBC to that which UKIP has received since 2010 might have seen them poll ratings higher than they are now [presently around 6-7%] - and perhaps significantly so (after all they famously achieved 15% of the vote in the 1989 European elections (25 years ago!)).

I put this out there, in BBC Bias Blogland, just to see what people make of it, as BBC watchers and democrats.

We (me and most of you, dear readers) aren't keen on our Greens, of course, and wish them no electoral success whatsoever, but please just think about this hitherto unbelievable proposition for a moment: Could it be that the BBC is being unfair to the Green Party?
Posted by Craig at 07:00