An eye for freckles

And talking about programmes I enjoyed....

When I was about 20 I had the idea of fusing science with poetry (as you do) and I remember writing a love poem that used imagery drawn from X-ray crystallography. I recall comparing the diffraction pattern of regularly spaced spots produced by the process to the freckles of a young lady I particularly admired at the time.  It was a god-awful poem (most of them were), but I had vivid flashbacks to it whilst listening to An Eye for Pattern: The Letters of Dorothy Hodgkin over five day this past week on Radio 4.

Dorothy Hodgkin won the Nobel Prize for Chemistry 50 years ago this month for determining the structure of important biochemical substances, principally penicillin and vitamin B12. She's the only British woman to have won a scientific Nobel Prize, hence her especial fame and, doubtless, a strong part of her appeal to biographers and BBC commissioners.

Perhaps her left-wing politics appealed too.

The series consisted of a chronological selection of letters sent and received by Dorothy - letters  to and from family, friends, lovers, colleagues, and Mrs Thatcher.

It was a cast of interesting characters, ranging from her globetrotting, supportive parents (left-field Agatha Christie characters), her mentor-lover 'Sage' (gifted scientist, lefty lady's man), her husband (a Marxist historian who spent most of his time abroad, some of it advising far-left authoritarian regimes). Dorothy herself came across as kind, conscientious to the point of being a workaholic, and modest (for a genius). Her commitment to her work and her colleagues was admirable - and her achievements inspiring.

The letters were introduced and framed by her adoring biographer, Georgina Ferry, who concentrated mostly on the science and the personal matters rather than on the political side of Dorothy Hodgkin.

The latter was touched on lightly - though Georgina did note that her subject was banned from visiting the U.S. in the early Fifties because of her husband's Communist Party links and then noted, as if it were only right and proper, that Dorothy went where she was wanted instead - i.e. to the Soviet Union and, later, communist China. 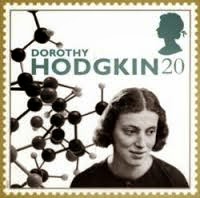 That exchange of letters with Mrs Thatcher concerned disarmament and peace with the U.S.S.R. in the run-up to the latter's meeting with Mr Gorbachev. Georgina hinted that some people think Dorothy's letter might have influenced Mrs Thatcher (a former chemistry pupil of Dorothy Hodgkin's), though I'm classing that as 'a massive stretch'.

One well-known episode in Dorothy Hodgkin's later life was omitted, however - one that intrigues me. Gone was all mention of the infamous foreword she wrote for a doctoral dissertation called Stereospecific Polymerization of Isoprene by one Elena Ceausecsu, D.Sc., wife of "the dynamic President of Romania" (as Dorothy called him). Elena was semi-illiterate and hadn't contributed a thing to the dissertation other than her name. It was a fraud and Dorothy Hodgkin fell for it hammer, line and sickle. Presumably no letters existed (or survived) about it, so that's why it wasn't mentioned. Perhaps.

[Maybe that's just me being over-political though. Geniuses, however well-intentioned, can be fools when it comes to politics. As can the rest of us - though not all of us write prefaces to works 'by' dictator's wives. When Galina Lukashenko, wife of the Belarusian dictator, wrote asking me to write a preface for her new book on BBC bias against her husband and his regime I refused point blank. She then tried Sue. Sue refused point blank too. So watch out Alan at Biased BBC, she'll be after you next!]

Still, it was a riveting series and Georgina Ferry 'curated' it well. Her enthusiasm for her subject and her non-point-scoring manner were attractive - though not as attractive as the freckles on the face of that young lady I used to like (the ones that resembled the diffraction pattern of regularly spaced spots produced by X-ray crystallography).
Posted by Craig at 11:50

Labels: 'An Eye for a Pattern'