The playground bully and the Tory

Some are likening it to the rumble in the jungle, others are calling it a ‘heated exchange’ but it does seem that the incident between Tory Philip Davies and lefties Jon Snow and his sidekick Krishnan Guru-Murthy  caused quite a stir at the ITN newsroom where Channel 4 news is based. Or should that read ‘biased’. 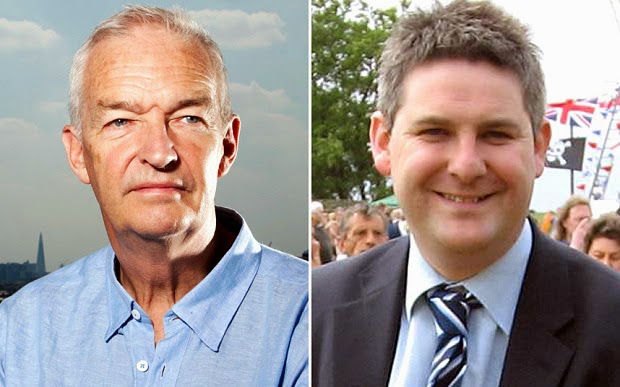 Anyway, Anita Singh has an article in the Telegraph about it, which is headlined “Jon Snow ‘acted like a playground bully’ says Tory MP”
Philip Davies MP had previously expressed incredulity at Rona Fairhead’s faith in the BBC’s reputation for objectivity and impartiality,  so we can guess what he thinks of Channel 4. Well, we don’t need to guess, because he’s quite open about it.

It seems that Mr Davies was invited to the ITN building in his capacity as a member of the Culture, Media and Sport Select Committee, but was ‘ambushed’ by Jon Snow to whom he had just been introduced by the deputy editor of Channel 4 news.

“she said, 'This is Jon Snow.' I said hello."He stood up out of his seat and at the top of his voice, so everyone in the newsroom could hear he said, 'You said I'm left-wing and biased - give me one example of an interview where I've been left-wing and biased.'"I said I had come to look around and hadn't come for an argy-bargy. He just kept repeating the same thing in a deliberately loud voice. It was like he was the playground bully and the newsroom was his playground. This carried on for at least five minutes.”

The exchange spiraled out of control till Mr. Guru-Murthy asked the MP to leave the building.
During the heated exchange Jon Snow said to Philip Davies:

Isn’t that annoying? Someone whose every word is Left-wing and biased asks for one example. You’re on the spot and there are so many to choose from you don’t know where to start.
Stephen Pollard has an interesting piece about this in the Telegraph. As Pollard says:

“At the risk of provoking a further eruption from Mr Snow, who appears not so much to be thin-skinned as to possess a comical lack of self-awareness, I have to ask: is there any viewer of Channel 4 News who does not think Mr Snow is biased? Isn’t that the very point of him and his show?”

Pollard is arguing that he prefers his bias up-front and open, not all pretendy like the BBC. He thinks fans of Snow like it that way and they’re getting what they want, adding that the same thing could be said of Guardian readers, which I suppose is one way of looking at it.  Many people are less sanguine than Pollard about that. They are disturbed by the harmful influence of Channel 4 and the Guardian as well as the more slippery bias of the BBC.
It wouldn’t be so bad if  Jon Snow didn’t deliver his bias whilst wearing the cloak of authority that automatically graces the anchor of a flagship news programme.

“The BBC’s bias – or disposition, if you want a less pejorative word – isn’t conscious. But we all bring our own dispositions to the work we do, and that’s as true of BBC journalists as it is of lawyers and plumbers. The BBC’s news simply reflects the mindset of its urban, culturally liberal staff.”

Of course Jon Snow massively abused his position when he aired his appallingly biased film about Gaza. I’m sure many people must have had this in mind when they read about the dramatic ITN newsroom confrontation.  Stephen Pollard probably did too, despite making the following, rather cavalier assertion:

"I’m a lot less bothered by Mr Snow’s obvious, in your face, that’s-why-you’re-watching-me bias than I am by the BBC’s, which makes claims for its news as something altogether more elevated."

He ends his piece with:

“This summer, (Jon Snow) recorded a video about Gaza that could have been straight out of the Hamas PR manual, entirely lacking in balance or context. The BBC’s deputy director of news and current affairs, Fran Unsworth, has said that no BBC presenter would have been allowed to make such a video.
Give me Jon Snow’s explicit bias any day, though, rather than the Beeb’s supposed but spurious objectivity. When it comes to Middle East coverage, at least Mr Snow’s heart is there on his sleeve for all to see. The BBC’s Middle East editor, Jeremy Bowen, is no less opinionated, but his views are couched in notional neutrality.But oh what fun it is to see the reaction of one of the great panjandrums of the liberal Left, when someone dares to utter a word of criticism. They can dish it out. But boy, they certainly can’t take it.

Update 26/10:  And here's Rod Liddle's take on this from the Sunday Times:


While being shown around the studios of Channel 4 News, the Conservative MP Philip Davies was set upon by a snarling Jon Snow, outraged that Davies had once dared suggest that the presenter was a tad biased to the left.
The row got so heated that the pair had to be separated by Snow’s unctuous homunculus, Krishnan Guru-Murthy, and Davies escorted from the building.
Snow demanded Davies show him evidence that he was biased. Phew — well, there’s a challenge, if ever there was one. But other than every single edition of Channel 4 News, is there anything else for the prosecution to work on?
Snow was once described as a “pinko liberal”. You might put that down simply as name-calling, but the person who described him thus was, er, Jon Snow. And then there was the video he made about the children of Gaza. The BBC said it would not pass its partiality test.
When a film is so pro-Palestinian even the BBC wouldn’t touch it, I think the word “bias” is not too strong.