Middle East Myths and the Media

Whenever you find yourself arguing about the Middle East, you’ll probably have the luck to be up against a fan of Ilan Pappé or Noam Chomsky. That is a major stumbling block.

Venerated historians can reference archival material till the cows come home, but documentary evidence seems not to figure in Israel-hating arguments, which are usually emotional and often inexplicable.
The media’s focus is permanently fixed upon Israel’s imperfections (which bear an uncanny similarity to ours) while no-one seems remotely uncomfortable about the seismic imperfections of her enemies.

How easily we cherry-pick whatever suits our preconceived fancies and how nonchalantly we disregard the rest. Facts only get in the way.
Denis MacEoin’s piece for Gatestone “Will Facts Ever Displace Anti-Israel Fiction? tackles one specific example, which stands for all the rest.
Batting for the Palestinians, we have the Irish.

The IRA  has connections with the PSC, and the Irish do tend to support the Palestinians. Perhaps they still can’t forgive the Jews for killing Christ, even though Pope Benedict XVl said he has done so personally, (most generous) but that’s not what Denis MacEoin was addressing. He was infuriated by an op-ed piece in a widely read newspaper, the Irish Examiner. He describes the piece, written by  a little-known journalist named Victoria White, as “an uncompromising diatribe, a spittle-flecked assault on Israel that dragged out the usual false claims of “ethnic cleansing” during Israel’s war of independence in 1947 and 1948.”

It is certainly most upsetting to come across factually inaccurate and slanderous material in a setting (or out of the mouth of a person) from whom one is entitled to expect better, and it’s typical of what happens when we get embroiled in un-winnable arguments with people who believe what they want to believe, fact or fantasy. Such people always seem suspicious of Jews and want to think the worst of them. The ascribe all manner of malevolent motives to Jews, and have persuaded themselves to doubt the legitimacy of Israel.

We don’t know why so many people are antisemitic or emotionally pro-Palestinian. It could simply be because they’ve been educated, informed and entertained by the BBC.
Or the Guardian.

Denis MacEoin considers that Pappé’s infamous book “The Ethnic Cleansing of Palestine” is so one-sided that it is in effect fraudulent.

Despite the fact that Pappé’s interpretation of historical events has been discredited and debunked by serious historians who substantiate the counter narrative with carefully researched documentary evidence, the Israel-hostile theses of Pappé and Chomsky satisfy the anti-Zionists by reaching the parts that other views don’t reach. Israel-negative interpretations fulfill a role and therefore have been highly influential. Revisionist historians supply fiction that replaces facts rather than temporarily displacing them.

With the help of the media, several specific myths have taken hold in a big way, from the mythical “ethnic cleansing“ of Palestinians in 1848, the so-called “genocides” that are supposed to have taken place from time-to-time ever since, the imaginary apartheid, the “siege” of Gaza, and the general vilification of Israel and all who sail in her. All these myths are neatly encompassed in the phrase ”What Israel is doing.” Those four words, frequently uttered by Jenny Tonge and others, elicit knowing looks from people who actually know nothing.

From Pappé’s book Victoria White has chosen one of the most significant ahistorical misunderstandings: “The campaign to ethnically cleanse the city of Haifa of Palestinians.”  MacEoin explains in detail that this did not happen - in fact the opposite is the case. There was no campaign, other than that of the Arabs to exterminate the Jews. “The Exodus of 1947-1948”, was an Arab-led exodus, engineered by Arabs, for the sole purpose of facilitating a planned annihilation (of Jews), which, as we know, failed.

Pro-Palestinian activists have this myth in their top ten. It is a myth, but one that underpins the whole victimhood strategy, which gets the pro-Palestinian juices running.
BBC Watch critiques a programme called “Agree to Differ” that was recently broadcast on radio 4.
Hosted by Matthew Taylor, formerly chief adviser on political strategy to Tony Blair, this very myth was was alluded to by one of the participants, and left unchallenged. Rafeef Ziadah was introduced as a “Palestinian performance poet and human rights activist.” As an introduction, that might sound commendable to the uninitiated, but it should perhaps have included the strap-line “...and leading anti-Israel campaigner”.
If Matthew Taylor’s grasp of the history is representative of the average government adviser on political strategy, is it any wonder we’re in the middle of an Islam-related crisis that no-one seems to know how to resolve.

There are far too many slapdash and poorly-prepared BBC interviewers and chairpersons publicly mishandling important discourse. They fail to challenge or correct errors, and their ignorant or partisan attitudes infuriate the better-informed audience and mislead the gullible, the vulnerable or the emotionally incontinent.

If they don’t know something, please don’t let them pretend they do.
A programme currently being trailed is to be aired on Saturday at 20:00 on Radio 4. It’s an episode of Archive on 4, called Media and the Middle East. Here’s the blurb:

“The rockets and missiles fly, from Israel into Gaza, from Gaza into Israel. It's the latest iteration of the conflict between Israel and its Arab neighbours which has flared since the very founding of the Jewish state in 1948.
Accompanying the conflict has been an unprecedented level of media coverage. And almost nothing is uncontested. Every sentence, every word of a news report is parsed for signs of bias by individuals and organisations dedicated to ensuring a fair deal for their point of view. Coverage is measured in minutes and seconds of airtime. Media organisations stand accused, by both sides, of prejudice, systemic bias and deliberate distortion.Why does this particular conflict, above all others, attract the attention it does? And why does it create such strong emotion, even among those with no connection to the region?John Lloyd, a contributing editor at the Financial Times, examines the evolution of coverage of the Arab-Israeli conflict from the founding of Israel to the present day.With contributions from journalists and those who monitor them, Lloyd asks why there is such focus both on the conflict itself and on those who report it. He traces the way reporting has developed from the early television age, through the introduction of 24-hour news channels to the inception of social media. And he examines the challenges of reporting fairly and accurately on a conflict in which every assertion is contested.”

The very first sentence gives an example of the last/first syndrome, so it doesn’t look promising.
Are “the media” feeling sorry for themselves because we’re scrutinizing every sentence for the smallest scintilla of bias? They wonder why there is such a disproportionate focus on the region, when they might ask themselves whether their own disproportionate obsession with the subject has anything to do with it.
Who is John Lloyd? Is he a covert anti-Israel zealot or just a common or garden mildly anti-Zionist media boffin? Or a Jew?
Woops! He’s a communist. Oh no, it says here that “Lloyd is a former communist who became a critic of the left’s anti-imperialism, and a proponent of military aggression by the United States and its allies.”  He wrote about Bias and the BBC in the Guardian in 2007. (A long time ago.)

Whenever the BBC tackles something like this and promises to lay bare the myths once and for all, it usually manages to make things even worse.  If the programme makers don’t even understand the very complicated history, or they learn the mythical version from each other, how can they make a fair assessment of possible bias? Even if they did make an effort to look further than Chomsky they’d be conscious of the Palestinian Solidarity campaigners looking disapprovingly over their shoulder.

There was a symposium the other day, the panel were all vigorous anti-Israel campaigners who, after mutually reinforcing a few of their favourite myths, agreed to get up and ‘do something’.   They’re all much more pro-Palestinian than Hamas. If all the Palestinians came to their senses and realised that they’d benefit from accepting Israel and getting on with building a positive, neighbourly, shared future, that lot would be furious. 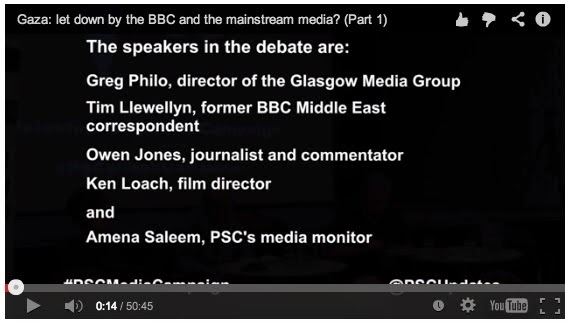 For some reason YouTube won't let me upload this video, but I might tempt you to look at it (Two parts) with these grabs instead. 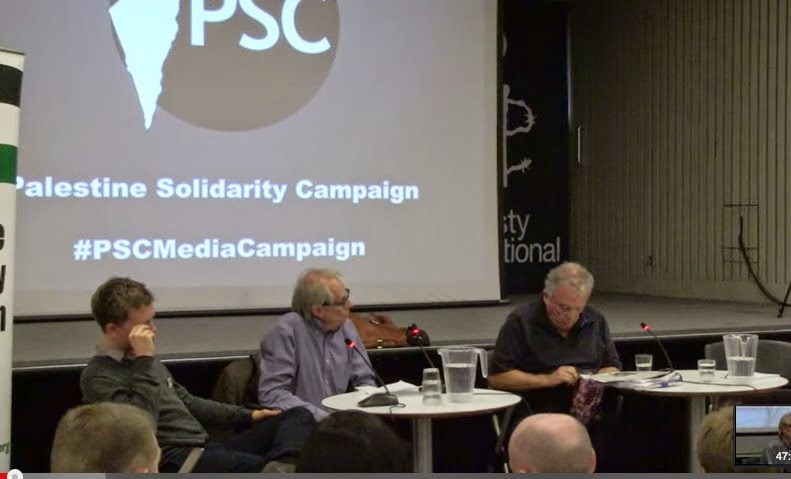