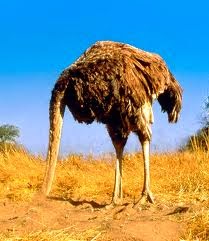 Did you know that ostriches, the world's largest bird, have three stomachs and that, unlike all other living birds, they secrete urine separately from faeces? Or that they run so fast in part because they have just two toes on each foot (most birds have four), with the large nail on the larger, inner toe resembling a hoof? Or that their famously large eggs are the largest of any living bird and weigh as much as two dozen chicken eggs, though they are actually the smallest eggs relative to the size of the adult bird? Or that they don't bury their heads in the sand when in danger?

Well, you probably already knew the latter, didn't you? That's a myth that's been exploded long ago.

I, however, have been sorely tempted to walk down to the few remaining sandy parts of Morecambe's beaches with a spade, dig a small hole, place my head in it and then scrape the surrounding sand around my head in order to avoid thinking about the murder of David Haines, the British aid worker, killed (it seems) by a British Muslim.

[My sister, staying with us, ordered me to turn off Broadcasting House this morning because they were talking about it. It was too much for her to take. Her daughter has just had twins].

Mr Haines sounds like he was a good man, and that photo with his baby...well, I'm sure you're feeling much the same about that as I am.

I also read this week (in major online Arabic newspapers) of British women (of the Muslim persuasion) being the worst of the worst when it comes to keeping order among Islamic State's sex-slaves. That's something too.

Someone who can run at 40 mph at Biased BBC was complaining this morning that some expert on BBC Breakfast (namely Paul Rogers, that Peace Studies chap from Bradford who the BBC keeps inviting onto its programmes) had asserted that Islamic State [the Sunni Salafist Islamist organisation which has announced the restoration of the Islamic Caliphate and is pursuing vicious pogroms against non-Muslims, Muslim 'heretics' (such as Shiites) and Sunnis who aren't 'Sunni' enough for its Islamic tastes] have nothing to do with Islam.

Hmm. I didn't see that interview with Paul Rogers but I can well imagine him saying that. When I think of him I always think of him with his big eyes, long neck, black feathers and long legs (which makes him quite the celebrity in Bradford). I've rarely seen his big eyes though, given that they've been buried in sand almost every time I've seen him on TV.

As I say though, I didn't see him today. I had my own head in the sand at the time.

I'd pulled my own head out of the sand long enough, however, to listen to this morning's Sunday on Radio 4, just long enough in fact to hear U.A.E.-funded L.S.E. Chair of Middle Eastern Studies Professor Fawaz Gerges - Sunday's favourite expert on Middle Eastern affairs [numerically their favourite expert - no really, I've been counting!] - speaking in a muffled voice and saying that Islamic State (peace be upon it) is a "social movement" with "no theology", "an intellectual wasteland" with "no sustenance...no ideas"...and nothing, yes NOTHING, to do with Islam.

I joke of course, but that joke isn't funny any more. It's too close to home and it's too near the bone: British-born Muslims flocking out to butcher in the name of Islamic State (and, apparently, being even more brutal than the rest), beheadings in Britain, rekindling anti-Semitism, and all the rest (need I remind you?)...

It doesn't make me smile. I wish I could laugh. I've seen this happen in other people's lives and now it's happening in ours....
Posted by Craig at 22:00