I hear Craig is putting his feet up and is smoking a big fat cigar instead of blogging, though he disputes this.

No Peace with Islam. No recognition of (moderate) Islam. No negotiations with  Islam.

The first one, The Deadly Israeli House Strikes Again, sets out the absurdity of the fact that in the eyes of the world the issue of ‘Settlements’ is firmly established as the only ‘obstacle to peace’ .

It’s as though somewhere in the deepest darkest recesses of the collective brains of the most ingenious of Palestinian strategists’, something sparked off an inkling of weakness in the opposition. Perhaps it was an entirely spontaneous stroke of genius - or perhaps a throwaway remark by an Israeli or US negotiator.  “Aha!” the Palestinian strategist must have mused. “Let’s try this out. It’s a longshot, but if we douse it with mud and throw it quite hard, by Allah it might stick.”  Only he probably used more flowery language.
“Who but a Zionist zealot would bother to delve into the geographical minutiae of previously negotiated and agreed land swaps,  and even if one did, who takes any notice of them these days and who gives a flying fig for areas A, B or C? Not we. Israel already epitomizes greed and expansionism, so let’s do it!  When a planning application for an extension to a Jewish house is approved, we will cry foul!” they must have exclaimed jubilantly if more elaborately.
“As if by magic, all three of our “noes”, all our suicide bombings, our rockets, all the Jihadi antics of our coreligionists, the inherent antisemitism of our prophet, all these will pale into insignificance against the insult, the intolerable affront to our dignity at the outrage of another Jewish house being permitted  in defiance of our preconditions.” How well they understood the way things are.
That’s the gist of it.

The other article is illustrated with a waxwork-like image of David Cameron. It’s about a puzzling phenomenon that no-one has ever seen. Believing in it requires a Leap of Faith and that... The title is “Moderate Islam is Our new Religion.”
We’re all familiar by now with David Cameron’s emphatic pronouncement, which accompanies every fresh declaration of outrage at yet another Jihadi beheading. “It’s nothing to do with Islam”
Islam has been hijacked apparently. “Take us to Mecca” “Convert or die”. Well, even if ‘moderate Islam’ has been hijacked, no-one’s seen hide nor hair of it since.
They seek it here, they seek it there etc etc..a decapitated dedicated follower of moderate Islam etc etc.

Anyway, there’s another piece that is related to this subject. It’s the man we love to hate,  or should that be the man we hate to love. Geert Wilders.

“During the past ten years and two days, the ostrich Cabinets did nothing. It has nothing to do with Islam, they lied to the people. Imagine them having to tell the truth.” 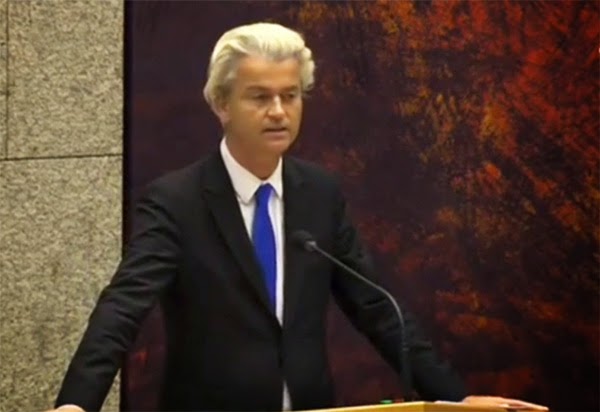