A story that hasn't caught the BBC's attention 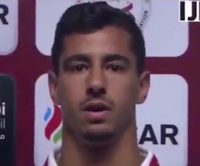 A story I've been seeing all over my Twitter feed but which hasn't caught the BBC's attention is the remarkable story of Tal Flicker, the Israeli judo gold medal winner at a Grand Slam tournament in Abu Dhabi. who sung the Israeli national anthem quietly to himself after his UAE hosts refused to raise the Israeli flag or play the Israeli national anthem. Everyone from Ruth Davidson ("Unbelievably dignified in a really horrible situation") to Marina Hyde of the Guardian ("Shame on the @IntJudoFed for allowing Abu Dhabi to host") has been commenting on it. Where are the BBC on this one?
Posted by Craig at 21:40