Aw, that's nice! The BBC's environment (activist) analyst Roger Harrabin is showing empathy towards his beleaguered colleagues at Today (where his reports feature regularly) after their recent "spanking" at the kinky hands of BBC Complaints: 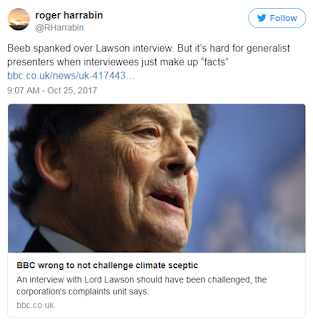 But Roger is nothing if not wholly supportive of his bosses' apology, and not above handing out a "spanking" of his own:

As Harry Enfield's Self-Righteous Brother Frank would shout, "Oi, Lawson and the GWPF, no!!!!"
Posted by Craig at 19:22