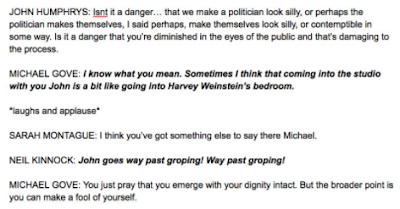 That being the case, just compare the BBC News website's account with Sky News's account of the same story.

Both, understandably, devote most of their articles to lengthy criticism of Mr Gove but Sky also gives over two paragraphs and a tweet to criticism of Lord Kinnock. The BBC's report, in contrast, merely quotes Lord Kinnock's joke in passing and devotes no paragraphs or tweets to criticism of him, so from the BBC's account you would never know that anyone had complained about him.

What that means I'll leave you to judge, but it's a marked difference and something must account for it.
Posted by Craig at 14:48