I clicked into the main broadcast news websites this afternoon and found three takes on the same news story. I took screengrabs. 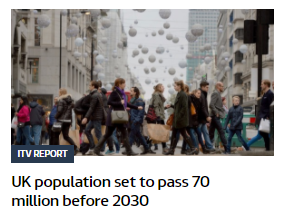 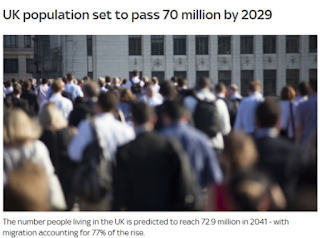 And the BBC had: 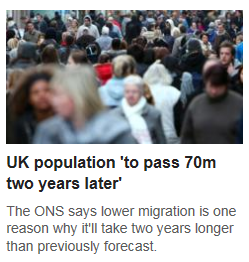 As you can see, both ITV and Sky presented the stark predictions of immigration growth. The BBC, in contrast, found an angle to downplay the figures - making the point that that 70 million point might be realised slightly later than first predicted (because of "lower migration") into the main point of the story.

That's very 'BBC' as far as reporting immigration is concerned.

On a related point, tonight's main ITV news bulletin led with the news:

Good evening. By the end of the next decade, the UK's population will stand at 70 million. Also claimed in official projections today, a doubling in the number of people aged over 85 by 2030. That will place even more pressure on families, the NHS and social services. The UK's population is growing faster than any other EU country and, with migration driving most of it, that poses even more questions for government.

Channel 4 News made it their second story, and Sky News have been covering it hourly too.

BBC One's main early every news bulletin didn't cover the story at all.
Posted by Craig at 18:09