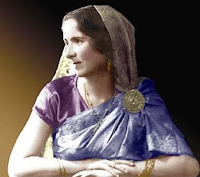 A Dead Ringers joke about Libby Purves's Midweek on Radio 4 was that the sainted Libby would always manage to find some extremely convoluted way to connect all of her random guests (say an astronaut, a novelist, a stamp collector and a homicidal maniac) and thereby create a happy web of interconnectedness between them.

Dead Ringers's Libby would doubtless have been delighted by a prominent feature on the BBC News website this weekend by the far-left Greek journalist Maria Margaronis entitled Savitri Devi: The mystical fascist being resurrected by the alt-right. It brilliantly manages to connect a Nazi (Savitri Devi) to Golden Dawn and Richard Spencer (no great stretch), and then to Steve Bannon, Donald Trump and Narendra Modi, linking them all in one wide web of mystical fascist evil.

Now, Maria is quite careful in her wording about Mr Bannon in particular (and, having Googled around, I can find nothing that directly connects him to the Nazi Savitri Devi. Can you?) but certain BBC journalists  - like the BBC's White House reporter Tara McKelvey - are being less cautious in response:

No, Tara, Maria didn't say that. She only very strongly implied it. (And that's not the same thing - at least legally-speaking).

Anyhow, Maria and Tara aren't the only ones busily connecting things at the moment. There's a piece at the Guardian by Carole Cadwalladr today which almost as brilliantly manages to connect "Trump, Assange, Bannon, Farage" in "an unholy alliance".

Reading it, I believe the headline writers seriously undersold the piece. The headline should have read, "Cambridge Analytica, Trump, LBJ, Assange, Bannon, Bigfoot, Farage, aliens, Putin, Leave.EU, the Loch Ness Monster...bound together in an unholy alliance".

An invite to the Newsnight studio is surely winging its way to Maria and Carole as we speak, and it's surely safe to say that the late, lamented Libby Purves (still thankfully very much alive at The Times) wouldn't have had to work too hard to harmoniously connect them.
Posted by Craig at 19:56