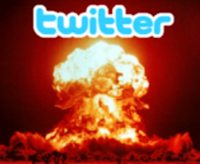 Michael Gove made a tasteless joke on Today and Nick Robinson tweeted about it.

The Govester has since apologised...

... though calls for him to drowned as a witch or burned alive in a huge wicker man on the outskirts of Brighton are continuing apace.

(Both punishments are far too good for him in my opinion. For this kind of 'joke' only hanging, drawing and quartering will suffice.)

Meanwhile, Nick Robinson has been getting it in the neck too, merely for tweeting about it. He's not apologising though (surprise, surprise!):

And, as Dan Hodges, says, why should he?

Now, I rather suspect that Nick's reasons for tweeting that crack of Michael Gove's weren't entirely pure and that he was possibly mischief-making somewhat in that he must have known that a Twitter Apocalypse would ensue and descend upon Mr Gove for it. He probably didn't guess, however, that he'd end up getting swept up by the unforgiving storm as well. Oh well, how sad, never mind!

Anyhow, Nick's obviously recovering from his experience and is now re-tweeting things like this: