"US President Donald Trump has seized on reports..." 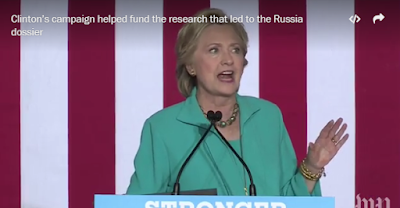 The paper claims that "The Hillary Clinton campaign and the Democratic National Committee helped fund research that resulted in a now-famous dossier containing allegations about President Trump’s connections to Russia and possible coordination between his campaign and the Kremlin" - something Mrs Clinton's campaign and the DNC have long denied.

Juicy stuff (for those who care about such things), and, it seems, very much not fake news.

President Trump might care to note that The Washington Post is behaving creditably here, and that mainstream reporters, like his least-favourite paper The New York Times's Maggie Haberman, are also doing their journalistic duty by putting on record that "Folks involved in funding this lied about it, and with sanctimony, for a year".

And how is the BBC reporting this tonight?

Well, for starters, it is reporting it. But, weirdly, its sketchy, rather skeletal report begins with the words, "US President Donald Trump has seized on reports that Hillary Clinton's team bankrolled a sleazy dossier of allegations linking him to Russia".

Is Donald Trump's reaction really the story here? Isn't the actual story that Hillary Clinton's campaign and the DNC, by the Washington Post's account, funded the (in)famous dossier about Donald Trump and then lied about it for a year?

I find it hard to disagree with Laura Perrins tonight when she tweets (about this very BBC article), "Textbook example of #BBCbias. Just text book. You are a disgrace to journalism."

She then adds, "Well I'm off, but I will be listening to @BBCr4today tomorrow to see how they cover this Russian dossier story, funded by DNC/HC + then lied about".

Yes, it will be interesting to see how they cover it.

Incidentally, Anthony Zurcher's 'analysis' in this piece takes the 'this kind of thing has been going on "since the dawn of democratic elections'" line.

In other words, 'move along, there's nothing to see here' re the DNC and Mrs Clinton's campaign - which seems a remarkably relaxed line to take for an 'impartial journalist'. A partisan pro-Democrat columnist I'd expect something like that from rather than a BBC journalist. (That said, he does say that the FBI has some questions to answer).

I must say that the BBC's reporting of US politics is far too partisan and ideological for my tastes.
Posted by Craig at 21:55