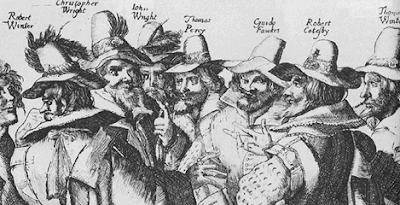 It's like a higher-quality version of Radio 4's Start the Week, and it's usually on for five nights a week. Its presenters are excellent and the range of topics is wide. It goes pleasingly deep too. And it's surprisingly broad-minded too on matters political.

Catching up with the more promising-looking editions of last week's offerings I came across an interview with Ronan Bennett, the writer of a new, three-part, prime-time BBC One historical drama about the Gunpowder Plot.

My ears pricked up as he talked about his intentions and reading the BBC's mission statement about the series confirms those intentions.

Yes, this high-profile drama (which the Telegraph's Tim Stanley says is "edge-of-the-seat" stuff) will be about "showing the consequences of what can happen when a religious minority is persecuted". And it will have a "contemporary resonance”.

The Catholic would-terrorists of 1605 will be cast as sympathetic human beings who had valid reasons to feel anger against the "relentlessly repressive" state, though there would be plenty of nuance and their violent intentions won't (it appears) be condoned.

Presenter Rana Mitter pointed out that James I began as a good deal less repressive towards Catholics than Elizabeth I, but Ronan was sticking to his guns (so to speak) and was clearly not allowing facts to get in the way of a good plot (so to speak).

Rana also drew out of Ronan Bennett what those "contemporary resonances" would be. They would be (a) to suggest to English Brexit voters that they take a good long look back at history and realise that English nationalism isn't a good thing and (b) that Muslims today are in a similar situation to Catholics in Jacobean England and that the state shouldn't be repressive towards them.

Why do BBC dramas have to always be like this, pushing messages all the time (and almost always the same kind of messages to boot)?

Rana reminded us of Ronan's controversial past and asked if it led him to sympathise with the would-be terrorists of 1605. (That's why I like Free Thinking. It doesn't give its guests a free ride).

Now Rana said that, yes, the series does have plenty of nuance and Ronan said that he wasn't trying to be propagandist. So we'll have to see.

Alas I remember Ronan Bennett's last high-profile BBC drama - a much-promoted radio play for Radio 4 about the migrant crisis called 'Our Sea'. I wrote about it at the time, calling it "agitprop" and "shocking bias from the BBC".

If it's anything like that then the anti-Brexit, be-nice-to-the-Muslims stuff will be laid on with a Spanish Armada-sized trowel.